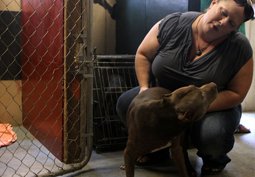 Cera Fletcher walks slowly past the newest pit bulls at the shelter she helps run, straining to be heard above the din of excited barks and thumping tails.

“We found her completely bald, covered in mange, fleas, ticks, just being eaten alive,” she says, pointing to one dog that was pressing its face against the cage to be closer to Fletcher. “Oh, and she’s 100-percent deaf.”

Other dogs have arrived at Bluffton’s Three Black Dogs kennel in even worse condition.

One was severely malnourished when it was seized by police during a raid on a drug operation in Orangeburg; two puppies were recently delivered to the shelter after being thrown in the May River and left to drown.

Beyond their medical problems, the pit bulls housed at the kennel were fearful, mistrusting and sometimes aggressive toward people. Under Fletcher’s behavioral rehabilitation, however — she refuses to be called a “trainer” — they’re not just healthy but calm, playful and ready for adoption, she says.

She also wants to rehabilitate the breed’s reputation for violence, one she says is undeserved.