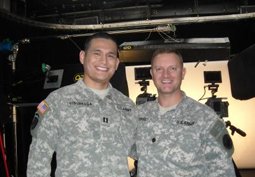 PINELLAS PARK, Fla. – The Army Reserve provides a jump start in life giving a positive impact on those who serve, Capt. Cesar Visurraga, 29, a medical-surgical nurse with the 865th Combat Support Hospital from Ashley, Pa., shares his experience and the impact the Military has on him as a Latino Soldier.

“It is Hispanic Heritage Month from Sept. 15-Oct. 15 what better way to reach out and express what the Army Reserve has done for me,” said Visurraga.

“I understand the hardships of a young Latino beginning a life with no roots on this land and trying to make an imprint of American success,” said Visurraga. “I understand the Latino who speaks both English and Spanish but struggles … for the pursuit of fitting in and success.”

He added, “I understand the Latino from different Latino countries because I’ve traveled throughout Latin and Central American and Caribbean and immersed myself in their cultures to make their individual dreams of success as part of my personal goals and prayer.”

Visurraga is one who came from poverty, by choosing the Army as a career path; he was able to reach personal goals and set high standards in his life using the resources and tools provided by the Army.

“The U.S. Army laid the groundwork for me paving a path to a wonderful civilian career that I am proud of … I am pleased to have the freedom to immerse myself into a civilian and Military career,” said Visurraga. “It’s like having the best of both worlds.”

As a young officer, and a graduate student, he feels that his education is an investment of a higher level of care for civilian and Military needs.

He remembers his first introduction to Military life, “In retrospect, I’ve been wearing the Army uniform since I was 14 years old,” said Visurraga, an a student at St. John’s College High School, and a Junior Reserve Officer Training Corps Cadet in Washington, D.C., “I was a JROTC member for all four years.”

“The combination of the U.S. Army Reserve and Veterans Affairs benefits has allowed me the ability to focus on my education without the financial struggles like my fellow Americans are facing,” said Visurraga. “My life has had memorable hardships on my journey towards joining the Military … it was the best individual move I’ve ever made in my life, which is hard to imagine because I was only 18 years old.”Visurraga was the first born of his family in the United States sharing the same personal, cultural, social and economic hardships as his mother did when she immigrated to the United States more than 29 years ago.Visurraga, his mother, Ana, and sister, Cecilia, called themselves the ‘Trio’ started their lives in America living in a small dark attic of a woman’s home. Ana always emphasized to him that education was the key to success and a roadway out of poverty.It was shortly after the 9/11 when Visurraga made the decision to pursue becoming an officer in the U.S. Army and earned his commission through the University of Scranton. “9-11-01 is a day that will always be engraved in my mind,” he said. “A clear realization and an acceptance of a duty that would become a huge part of my life.”

“While in Baghdad, I was trained to be an Intensive Care Unit nurse … the ultimate reason for my training was to treat service members,” said Visurraga. “As a nurse, aiding a fellow soldier on the frontlines is the epitome of all Army nurse preparation to be executed.”

Visurraga expressed, “The most unforgettable, rewarding and challenging experience by far has been the first time my intensive care unit received a wounded Soldier … attempting to save his life while in Baghdad, Iraq.” It was Visurraga’s greatest honor to provide care to this wounded Soldier, who gave so much.

“The combined efforts in trying to revive him were intense, emotional, and focused,” recalled Visurraga. “This was the first time I ever saw a U.S. Soldier die before me and the purest moment of my allegiance to my country’s effort.”

Visurraga’s Peruvian family is proud of his accomplishments and his military service, he stated, “In my mom’s eyes I am like a General, but I remind her that we have a chain of command, and that I am a young developing officer.”

Visurraga holds a Bachelor of Science in Nursing at the University of Scranton, and the school fully supports and encourages his Military service while he completes Masters.

“Hispanic Heritage Month spotlight on fellow Latinos is a great way to encourage Latinos to join the U.S. Army and succeed in life,” he said.