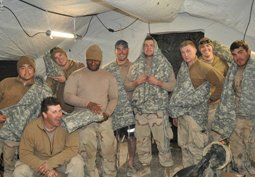 Rhode Island military mom JoAnne Camara wanted to do something special for her son when he was on his second of four deployments, to Afghanistan. After looking into different useful and special gifts, she ultimately sent her son a volunteer-made quilt, sewed from the same materials as uniforms so that her son could use it in public.

Knowing that the rest of the service members in the troops of her son’s unit did not get the quits, JoAnne worked with the Camo Quilt Project to have them made and distributed to everyone for free. Now, JoAnne is a big supporter of the Camo Quilt Project, recognizing that there are many ways to make a difference in the lives of deployed service members. She has raised thousands of dollars in donations.

For more details on this heartwarming story and ideas for deployed service members, read this SpouseLink entry.

Anyone interested in paying it forward with JoAnne is encouraged to send donations. Checks should be made payable to Franklin Legion Post #387 and mailed to: