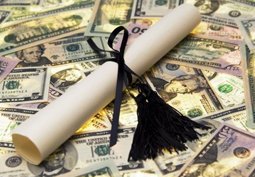 WASHINGTON — Members of the military are having trouble grappling with the confusing patchwork of student loan benefits they can receive and often end up taking on tens of thousands more dollars in debt than they needed to, says a new government report.

The report released Thursday finds financial institutions often give service members bad or incomplete information or are improperly denying them the reduced interest and other benefits that they are entitled to receive.

The findings are based on complaints and requests for help from service members across the country, including many who saw their loans balloon when they left active duty. And many complained that financial institutions did not properly explain how their loan deferrals worked, or tell them how much interest would automatically accrue once the deferral ended.

Officials, however, could provide few details Thursday and acknowledged they can’t really quantify the problem. They said they don’t know how many troops may be affected, how much unnecessary debt they have accumulated, or whether financial institutions are deliberately gouging military members or if they are simply uninformed and making mistakes.

The report was compiled by the Office of Servicemember Affairs within the Consumer Financial Protection Bureau. The office was created in Congress’ Wall Street reform legislation so it could better coordinate with other federal and state agencies on consumer protection issues, as well as be an ombudsman for student loans.

One service member found that his $61,000 in student loans shot up to $85,000 when he deferred payment for five months, the report said. And while each situation may be different, it said that if the variety of benefits are used and applied properly someone who enters the military with $80,000 in loans could save almost $50,000 over the life of the debt.

“The number one reason people in the service lose their security clearance is because of financial problems,” Defense Secretary Leon Panetta said at a Pentagon press conference Thursday. “Student loans are one important part of the total debt burden – from mortgages to credit cards to other debt – on those who are serving in the military today.”

Holly Petraeus, assistant director for the Servicemember affairs office, told reporters Thursday she believes issues with student loans may be even greater than the problems military members faced with mortgage debt and foreclosures.

She said the military plans to do more training and education to ensure service members know it’s not too late to do something to rectify their student loan debt.

Among the benefits that military members can receive are: