Military Gets Warning on Energy Drinks 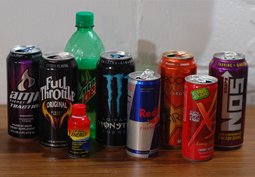 WASHINGTON — U.S. service members in Afghanistan battle zones who consumed three or more caffeine-charged energy drinks a day were prone to sleepiness and dozing off while on guard duty, a report says.

Forty five percent of the service members in Afghanistan combat areas in 2010 consumed energy drinks daily, some of which contain the caffeine equivalent of one to three cups of coffee, the study said. The finding was published Thursday in the Atlanta-based Centers for Disease Control and Prevention’s Morbidity and Mortality Weekly report.

About 6 percent of adolescent and young males in the U.S. civilian and military populations drink energy drinks each day, the report said . The products, such as those made by Monster Beverage Corp. and Red Bull, can have negative side effects, including caffeine intoxication, and have been the focus of investigation by the Food and Drug Administration.

Fourteen percent of service members surveyed consumed at least three energy drinks a day, according to the report. They reported sleeping less, having more sleep disruptions from stress and illness, and falling asleep on guard duty and in briefings more frequently than those who had two or fewer of the drinks a day. They were also more likely to report sleeping less than four hours a night on average than those consuming fewer energy drinks.

For the study, the Walter Reed Army Institute of Research analyzed data collected in 2010 on service members. A total of 988 male service members in the U.S. Army and Marine combat platoons deployed to Afghanistan agreed to answer questions about how many energy drinks they consumed.

Drinks consumed included those from Monster Beverage, based in Corona, Calif., and Red Bull, the most-popular energy drink in the U.S. by retail dollar share. Red Bull Energy Drink is a product of closely held Red Bull based in Fuschl am See, Austria.

Service members were also asked questions about their use of sleep medication, average number of hours spent sleeping, and work impairment.

Previous research has found that 200 milligrams of caffeine, the equivalent of one to two energy drinks, improved cognitive performance in the military population.

Service members in the National Guard and Reserves were significantly more likely to use energy drinks than their active duty counterparts.

No differences in energy drink consumptions were found related to having had an accident or making a mistake that affected the mission because of sleepiness, the study said.