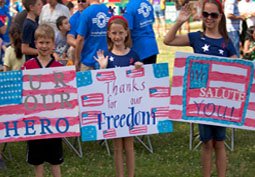 Today was Military Appreciation Day at Arrowhead Stadium, a chance for the Chiefs to give back to members of the military.

The theme throughout the game was honoring and recognizing those who have served our country. Military members participated in stadium activities, such as the first pass, which was from Technical Sergeant Eric Gaiser, as well as one of the honorary Coca-Cola Coin Toss Captains of the game, Adjutant General John Hamilton. Also during the day, Army Major Sean Heidgerken carried an American flag to lead the team out of the tunnel, during pregame introductions.

And it didn’t stop there. In the third quarter, the Chiefs recognized Thomas and Monica Breece, along with their four children.

Thomas and Monica were both members of the US Army, who have moved all over the country, looking for a place to finally settle down. Thomas is originally from Kansas City and recently took a job with the Army Reserve in Independence; they have been in the process of looking for a home, but in the meantime, the family is currently living with Thomas’ mother.

Operation Homefront’s Homes on the Homefront surprised the couple today and awarded them with a home. The program helps secure military members with a place for them and their family members to live, giving them part of “the American dream,” owning a home.

“Our mission statement is providing emergency assistance and other assistance to service members, their families and wounded warriors,” Paul Cupach, Executive Director of Operation Homefront of Kansas and Missouri explained. “We primarily help the demographic between E1 to E6, because those are the ones that are the most financially challenged in the military.”

Thomas and Monica had no idea they were receiving a mortgage free house today, instead they were under the impression that they were here to lead the Sea of Red in the war chant as the drum honorees.

“This was so unexpected; I have no idea what to even say,” Thomas said. “I thought we were going to bang the drum, but when they put the photo of the house up on the big screen and said it was our new home, I was absolutely shocked.”

Their reactions were priceless; tears of joy were flowing, the children were cheering and Thomas and Monica were so honored and appreciative of their new house.

“We had no idea we would get picked for this but it’s so wonderful,” Monica said. “It’s such a great homecoming too. We’ve been traveling to different states for different jobs and finally came back to Kansas City for my husband’s job so it’s wonderful. We were going to be looking for a place to stay next week and turns out now we have a place to stay forever.”

This was one of many homes that Operation Homefront will provide this year. The program is anticipated to award over 100 military families with a home in 2013.

“It was a really special day,” Cupach noted. “Operation Homefront is a partner with the Chiefs, as well as Wells Fargo who helped provide this home for the family today. Both the husband and wife are a part of the military, and this is our way of giving back to the families who have done so much for our country.”

To apply for a house visit Homes on the Homefront, or to find out more information about Operation Homefront visit their website here.