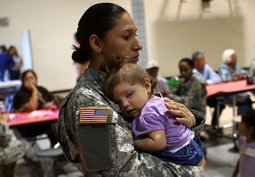 A provision in the national health-care law that lets young adults stay on their parents’ insurance plan is popular with many families—but not ones in the military.

Families covered by Tricare, the health program for active and retired members of the military, must pay as much as $200 a month to let an adult child stay on their plan until age 26. Most families in private plans now pay no fee to extend such coverage. Military families are starting to complain about the disparity, saying they can’t afford those premiums and have let their children go uninsured.

The fee for young adults aside, Tricare has a significant advantage over private insurance plans: Most beneficiaries don’t pay premiums to participate. By contrast, workers in private plans paid on average $4,316 in premiums for family coverage in 2012, according to the Kaiser Family Foundation, and their employers paid an additional $11,429.

Under the 2010 law, insurance plans offered by civilian employers, including plans for federal government workers, have to allow parents to keep children enrolled on family policies until their 26th birthday. The plans aren’t permitted to charge a separate fee for such coverage and, in general, family policies cost the same regardless of the number of children they cover.

An estimated 6.6 million young adults have taken advantage of the provision, according to the Commonwealth Fund, a private foundation that supports the health law. Nearly half of all 19-to-25-year-olds—some 13.7 million—use their parents’ insurance, the foundation said.

Initially, Tricare wasn’t affected by the health law, which meant it which was focused on traditional private insurance plans that didn’t have to allow children to stay on their parents’ plans past age 21, or 23 if they were full-time college students. Once the provision became popular with consumers, lawmakers passed separate legislation requiring Tricare to adopt it.

The final legislation directed the Department of Defense to charge families for the full cost of the additional coverage. Sen. Mark Udall (D., Colo.), an author of the legislation, said the fee was included because legislators wouldn’t support providing the coverage free of charge. Looming defense cuts have put pressure on Tricare and overall military spending.

That fee is either $176 or $201 a month for each young-adult dependent who wants to be covered through a parent’s insurance, depending on the type of plan. Tricare says the premiums are based on data for medical costs incurred by similar dependents and administrative expenses. Next year, premiums will fall to $152 or $176 a month.

Nick Papas, a White House spokesman, and Cynthia Smith, a Defense spokeswoman, both said Tricare differed from private insurance plans because it didn’t charge members a premium that could absorb the additional costs of covering the young adults. They pointed to Congress’s role in including the fee in the legislation.

The monthly premium has deterred most families, as have other restrictions that young-adult dependents be single and have no access to other insurance through a job. Those requirements aren’t in place for most civilian employer plans. Of 230,000 young-adult dependents of service members who might have signed up, only 20,740 had signed up for the Tricare extension by August, according to the Department of Defense.

Bob Becker, an Air Force retiree in Colorado Springs, Colo., had hoped the health overhaul would help his 24-year-old son Corey, who is living at home as he finishes culinary studies at a community college. When the Beckers found out about the premium, they decided it was more cost-effective for Corey to go without insurance and use an urgent-care center when he got a bad cold or a pulled muscle. “I know he’s a healthy kid, but you just worry if he gets seriously sick,” Mr. Becker said.

Danny McNamara also was put off by the premiums after he lost coverage through Tricare on his 23rd birthday last year while a student at Texas Tech University. He said he ended up getting his own private plan and paying premiums of $124 a month with money left over from part-time jobs after his parents persuaded him not to go without coverage.

“I’ve broken a lot of bones, so I thought I had to have insurance,” he said.

Tricare’s charge illustrates how insuring young adults, while cheap, changes costs for health-care plans. Consulting firm Mercer said in the past two years, medical costs have averaged between $1,600 and $2,400 a year for each young-adult dependent because of very high costs incurred by a few enrollees.

Civilian employers reported in a 2011 survey that private plan costs had gone up 2% overall that year as a result.

Some benefits managers say that, over time, private plans can absorb the cost of additional young adult dependents because participants pay for family policies for longer.