Military Couple Save Soldier from Suicide 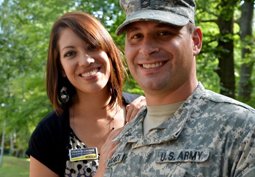 The Soldier had called stateside, telling friends goodbye. Fortunately, those friends called Military OneSource, a service that counsels Soldiers and families during difficult times. They alerted military police in Kaiserslautern — but they didn’t know where to look.

Licciardi, the noncommissioned officer in charge of the garrison’s religious support office, tried the Soldier’s cell phone. No answer. He and his wife, Charlene, got into their car — not knowing where to go. Licciardi called again, and again, and again. After 15 calls, he heard the Soldier answer in slurred words.

An hour earlier, the Soldier had parked in an isolated area and overdosed on pills. Barely conscious, the Soldier could not tell Licciardi where the car was. Time was running out. If Licciardi couldn’t keep the Soldier awake and figure out where the car was, it might be too late. That’s when suicide prevention training kicked in, he said, allowing him to stay focused.

“Danny was very calm, totally in control. I was really impressed,” said Charlene Sanchez-Licciardi, who works at the garrison’s Army Community Service. “We had to ask leading questions because we did know where the Soldier was.”

Training and suicide prevention awareness information helped the Licciardis as they drove along a wooded road behind Ramstein Air Base. Nerve wracking minutes passed as they kept the Soldier talking.

“Stay awake,” he told the Soldier. “Don’t close your eyes.”

Danny had an idea where the Soldier was. Meanwhile, Charlene called the military police — telling them about the pills and Soldier’s relative location. Out of the corner of his eye, using what Charlene described as a “sixth sense,” Danny spotted the Soldier’s car.

“When we got there it was even more nerve wracking,” Danny Licciardi said. “The MPs and the ambulance arrived about five minutes later.”

The Soldier was taken to Landstuhl Regional Medical Center and afterward went to the U.S. for further treatment. For their efforts, the Army’s Installation Management Command recently recognized the Licciardis as heroes. During a teleconference, Joe Capps, IMCOM’s executive director, told the Licciardis how proud the command was of their dedication.

“What distinguishes a great leader is that they intimately involved and care about Soldiers,” Capps said. “They do not let time or distance stand between them and the people they lead. The Army owes you a lot for that type of leadership.”