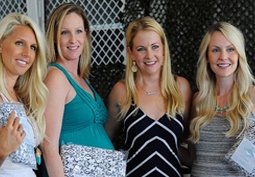 Forty expectant mothers whose spouses are in the military got a special treat this week: a baby shower hosted by actress Melissa Joan Hart.

Hart hosted a group baby shower thrown by the nonprofit group Operation Shower in partnership with Birdies for the Brave on Wednesday at Liberty National Golf Course in Jersey City, N.J. The mothers are the spouses of deployed members of the New York National Guard and Joint Base McGuire-Dix-Lakehurst.

Hart could not be reached by ABC News Thursday night, but she tweeted about the event on Wednesday: “Gorgeous baby shower for 40 military moms thrown by @operationshower and @Barclays with sponsors like Carousel Design! Lovely day! #baby #shower #pga #golf #military #birdiesforthebrave”

In a statement issued in advance of the event, Hart, 37, said she was pleased to be involved in the event to show her appreciation for the mothers-to-be.

“I know how difficult it can be raising a family in the best of circumstances, and truly admire the strength, courage and perseverance it takes to keep things running smoothly at home during deployment,” she said.

Hart, who has three sons with husband Mark Wilkerson, added: “Pregnancy should be a magical time, and I can’t imagine celebrating that milestone without your spouse.  These women deserve to be celebrated.”

Hart starred in the sitcom “Sabrina, the Teenage Witch,” played the title role in “Clarissa Explains All,” and now appears in “Melissa & Joey” alongside Joey Lawrence. The comedy airs on ABC Family, which is owned by the same corporation that owns ABC News.

Operation Shower is a non-profit organization dedicated to celebrating and honoring military families by providing baby showers for military moms-to-be whose husbands have been deployed or seriously injured.