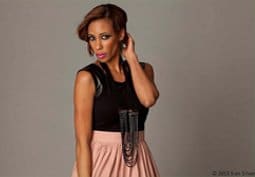 New York City: This may sound cliché, but consider it the scene I am setting for you, one that was set long before any Broadway show or Woody Allen film. Its wide streets were designed to accommodate a wide-ranging cast of eclectic characters. We open with Martha Luna Medina. She is petite, feminine, originally from Venezuela, with only a trace of an accent. She has a cocoa complexion, chin-length hair and is fashionably dressed in a billowy skirt and pearls dangling, Chanel runway style. Alas, Martha is no ordinary New Yorker strutting and fretting her way about the avenues, clicking her heels through the mass of supporting characters in our hectic Manhattan.

The “melting pot” takes on new meaning in summertime as temperatures rise and the island sizzles — not only with scorching heat, but with talent (from writers to actors to comedians, physicians, number crunchers, financial wizards, lawyers… and more). Then there is Martha: During the week, she works for a shoe designer part-time and moonlights as a fashion blogger (of her own domain, www.MDollNYC.com), noting the latest trends and covering swanky events where she hobnobs with celebrities and scores swag bags assembled to garner editorial reviews. Quite enviably, she has met and connected to famous faces that we see on fashion pages and she regularly poses for pics with celebrities. She has interviewed Betsey Johnson and briefly hung out with It Girl and “fashion crush” Olivia Palermo. As a respected fashion blogger, she is regularly consulted by those in the industry and is a frequent contributor to Lucky magazine.

But Martha is no ordinary 30-year-old, keen to embroider her crest on the fashion world’s tightly-stretched cardigan. Though she possesses a tenacity that would put Whitney Port of “The City” (the fashion-forward spinoff to MTV’s “The Hills”) to shame, a trait that warns “full speed ahead” (She contacted me several times in the immediate aftermath of our interview to find out when this piece would run!), Martha is balancing a whole other life. She is a military wife, and when she and her husband met, she knew the Army would be first priority. Before his deployment last winter, they had lived blissfully as a married couple for almost four years — well, a near-blissful four years: There was always that one nagging anxiety about potential deployment.

“I knew what I was getting into as an Army wife,” says Martha in a sagacious tone that belies her chronological age. “The Army owns my husband first, and I have to understand that. It takes patience, trust, communication, plus my own acceptance and faith. These are my principles that get me through. I continually am thinking positively and reminding myself that I will see him again very soon.”

While her husband Joe is serving our country, Martha tends to return from fashion events at a reasonable hour. Often, when she is getting ready for bed, he is just waking up and they will speak. “When he is on a mission or waiting to be stationed, it’s very difficult not to speak with him, and (understandably), I was depressed initially. Those rare times when we can’t speak (for longer periods) — due to what’s going on where he is — are the hardest.”

In the “Diary of a Fashion Army Wife” section of her blog, Martha details the difficulties and how faith and her basic principles have gotten her through what is proving to be a bittersweet time. Navigating the Manhattan fashion scene is exciting and fun, interviewing designers about new clothing and accessory lines is thrilling, but missing her other half is an unbearable sadness that she lives with, an obstacle to an otherwise charmed life that she is continually overcoming by working, blogging and reflecting.

As for Joe, he is extremely proud of how Martha has become a fashion blogging Army wife. He emails me directly during a short break between military stationing:

To tell you the truth, I don’t even know where to start. I think one of the hardest jobs in the world is being a military spouse. They are the ones that keep our country safe because without their support, we would never be able to perform well. They are the ones that keep our minds in place, fix all the problems back home while we are deployed, and I think behind every great soldier there’s a great military spouse. A lot of people think about us (soldiers) like heroes but I think they are the real heroes. I honestly salute every military spouse in this country. That’s a job I will never be able to do. About my wife, I think she is the best army wife in the world. She has given me unconditional support. She always says that I’m her hero, but she does not know that she is my hero.

Well Joe, she does now, and though you might be a little preoccupied to read her posts at this very moment, it warms her heart. After Martha and I meet for coffee in an East Side Barnes and Noble, she gathers her ruffled skirt and skips off ladylike to explore more of her Manhattan, noting the original costumes and maquillage of passerby and in stores along the way. She envisions the pictures for her next blog post in a way that only the fashion-forward can fathom.

Spotlight on Martha. Her area of the stage remains lit until around 9 p.m. and then, end scene.