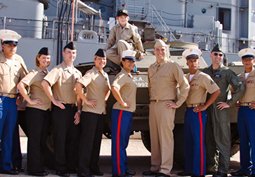 MARINE CORPS BASE HAWAII – Children often dream about superheroes or magical powers, but most realize these dreams aren’t practical. There are some who never lose their dreams and await the opportunity to fulfill them. But there are also those who want to help make others’ dreams come true. Marines with Combat Logistics Battalion 3 grouped together from Feb. 15 to 19 to help a child with cancer fulfill his dreams.

Carl Hornbeak-Hess, an 11-year-old from Mill Creek, Wash., who has been diagnosed with acute lymphoblastic leukemia, dreamed of becoming a World War II Army Air Corps pilot whose aircraft is shot down and crash lands on a deserted island.

Hornbeak-Hess was granted his wish with the help of Marines, sailors and the Make-A-Wish Foundation. His journey began, Feb. 15, when he flew into Honolulu International Airport and was picked up in an original World War II Jeep. In a convoy of WWII vehicles, he was brought to the USS Missouri Battleship Memorial to become a member of the Army Air Corps.

After arriving at the famed memorial, he received original WWII-era gear and his new uniform, making his dream a reality. As he marched away to change into his newly received uniform, a group of Marines stayed close, replicating the manner in which Marines guarded officers on ship during WWII. A formation formed at the front of the ship. Marines and sailors stood at attention as Hornbeak-Hess’ father pinned silver bars on his son, signifying his promotion to first lieutenant in the Army Air Corps. Hornbeak-Hess smiled as Marines and sailors walked up to salute him and congratulate him on his promotion.

“It’s great to see him smile and be happy,” said his stepfather, James Sullivan. “This is something he wouldn’t be able to do otherwise, and that nobody else has done.”

After his promotion aboard the USS Missouri, Hornbeak-Hess received a tour of Pearl Harbor, during which he was involved in the evening colors ceremony and helped carry the flag after it was brought down. Later in the evening, he toured the USS Missouri Battleship Memorial and stayed on it overnight alongside Marines and sailors – a rare opportunity not available to the public.

The next morning, Hornbeak-Hess reported to Dillingham Airfield, where he climbed aboard an aircraft to receive a bird’s-eye view of Oahu. After the aircraft landed safely, Marines blindfolded him and drove him and his stepfather in circles near Puaena Point Beach Park in Haleiwa. Hornbeak-Hess had no idea where he was when they dropped him off on the “desolate island.”

The boy and his stepfather created a shelter from the parachute that deployed during their crash landing on the island. Unaware of their location, the duo surveyed the area and established a camp near the ocean. All the while, Marines stayed in contact with Sullivan to ensure Hornbeak-Hess was in the right place at the right time. They stayed close by in case something went wrong or if they needed immediate help, though the Marines would shortly play completely different characters.

A few hours passed, allowing Hornbeak-Hess to get a true feeling that they were stranded with no help. Sullivan was told to bring him to the water for a surprise, and as they stood near the ocean water, Navy divers arose from the water without warning. Hornbeak-Hess hadn’t seen the divers until they stood up out of the water. The divers were helping to support their first lieutenant, who had recently crashed. They caught fish for Hornbeak-Hess and the rest of the team to eat, and then set out with their commander to search for possible insurgents in the area.

Marines took on the role of the insurgents and were attacked by Hornbeak-Hess and his team of Navy divers. The boy tackled a Marine trying to escape capture, and the Marines were tied to trees and questioned. He warned them to stay away from his camp if they wanted to live. By the time the capture was complete and warnings were issued, the fire had been prepared. The fish were gutted, washed and skewered on a wooden stick. The Marines, no longer the enemy, came to join Hornbeak-Hess in eating the freshly cooked fish.

“It’s a dream for me to be able to help make Carl’s dream come true,” said Sgt. Jonathan Feliz, an engineer maintenance floor chief with CLB-3 and native of Lawrence, Mass. “This experience helps me and the other Marines grow as people. This is the best way I know to give back.”

After dining on the fish, Hornbeak-Hess decided his dream was complete and called it a night, thanking everyone for what they did to make his dream come true.

“There are so many more people involved than I thought,” Hornbeak-Hess said. “It’s really good to know that everyone wanted to help me with my dream.”