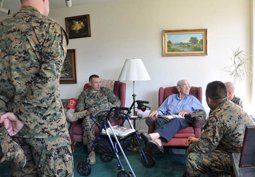 Marines are stepping up to assist a 93-year-old World War II veteran after learning he returned from a doctor’s appointment to find his home destroyed by vandals.

Elbert Wood served as a Marine rifleman for four years, before being medically discharged as a corporal for wounds sustained on Guam. He received two Purple Hearts during his time in the Corps. When he returned to his home in Houston last Monday — just 19 days after losing his wife — he found the walls, furniture, appliances and carpet covered in spray paint.

“When I opened the door I was just amazed to see spray paint on the walls,” he said. “I’m 93, so I have to walk with a walker, and I just went through the house and hollered around to ask if anyone was still there.”

Two juveniles were later arrested. His was the second home they allegedly hit that day, he said, and he would’ve shot them had he been home when it happened. But one of the fathers came to apologize later, and Wood said he felt bad that he has such troubled kids, so maybe he wouldn’t have been so hard on them. Maj. Roberto Rodriguez, the inspector instructor with Alpha Company, 1st Battalion, 23rd Marines, said as soon as he heard about what had happened to Wood’s home, he decided to go out there with his Marines.

“We came out here to shake his hand and tell him we had his back,” Rodriguez said. “We were just going to clean up, but then a local radio host came in with an army of contractors, so now we’re clearing the whole house so they can make repairs.”

Wood said having the Marines show up to assist was great to see.

“I don’t know what they’ll try to do, but I know they can get it done,” he said.

The members of 1/23 aren’t the only ones who want to help. Veterans with GruntLife, an organization for combat vets started by former infantryman Derek Cloutier, turned to Facebook to gather donations. Their goal: to send Wood to Washington to visit the World War II Memorial and National Museum of the Marine Corps.

Former Army Spc. Keith Holden, 33, a combat medic turned adviser with GruntLife, said they raised enough money to meet their $5,000 goal within 72 hours. Now any additional money they raise will go straight to Wood and his family, he said.

While there are other organizations that help World War II veterans get to the memorial, Holden said the members of GruntLife want to make sure Wood’s not stuck on a waiting list and that his children have the opportunity to visit the memorial with him. Three of Wood’s four children are able to travel and will be joining their father for the trip slated for April.

“With everything this man has been going through in the last month, it’d be an amazing honor to send him to see all the memorials out there for veterans like himself,” Holden said.

The trip should be a special one for Wood, whose son said he’s been in talks with Holden about the fundraiser. Wood recalled the firefight he faced from a ditch on the side of a mountain when deployed with 23rd Marines.

“The Japanese fired with everything they had,” he said. “They tried to get us and couldn’t reach us with their machine guns, so they got us with mortars.”

Hit with shrapnel, Wood said he crawled from the ditch to a vehicle that took him to a ship.

Holden said he found it troubling that teenagers would do anything to hurt someone like him. Rodriguez agreed, and said his Marines — from junior enlisted to officers — didn’t hesitate to help.

“It’s all about showing respect,” he said. “It’s great to see these young guys show some respect to a man who paved the way ahead of us.”