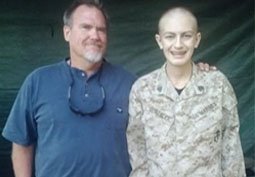 CAMP PENDLETON — A group of Camp Pendleton Marines made a Christmas wish come true for a teen fighting cancer. Jared Gonzales, a North County 15-year old, recently finished his fifth round of chemotherapy in a six-month fight against non-Hodgkin’s Lymphoma.

Jared’s long-time dream is to be a Marine. His Facebook page shows him dressed in camis from his uncle who served in the Marine Corps. The caption says, “Thank you Uncle Dave for the uniform.”

Several Marines from Camp Pendleton’s Headquarters and Service Battalion escorted him on a shopping spree organized by the Make-A-Wish foundation on Dec. 14. As they walked through the mall, the Marines answered Jared’s questions about joining the Corps.

Jared got an Xbox and a few gifts, but he used the rest of his spending money to buy toys for children at Rady Children’s Hospital in San Diego.