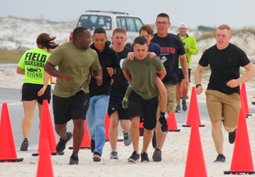 If you’ve ever doubted your abilities or stopped yourself from going the extra mile, then you need to meet Ben Baltz.

When he was 6, he was diagnosed with bone cancer (osteosarcoma) and had to have part of his right leg removed. He’s now 11 and uses a mechanical knee and prosthetic leg to do everything an able-bodied boy can do: play baseball, soccer, swim, bike, climb trees. In fact, he does more than your average kid; he competes in triathlons!

Last weekend, he was racing in the Sea Turtle Tri in Florida. This meant a 150-yard swim, a 4-mile bike ride and a 1-mile run — all back to back.

Ben’s mom eagerly waited for him at the finish line. But the time went ticking by and she started to worry.

What she didn’t know was that about halfway through the run, there had been a problem with his leg; It hooks together with screws and one of them had come loose, so the leg literally broke in half. This isn’t the first time it’s happened, either. This active boy has managed to break 10, supposedly “indestructible” prosthetic legs (made of carbon fiber, mind you!).

Now, here’s where you need to get out your hanky, because it was this moment that had the spectators in tears:

“All of a sudden the announcer just said, ‘Ladies and gentlemen, I want you to turn around and look at what’s happening on the course’ … Everybody was crying,” she says. A group of Marines had lifted the boy and carried him across the finish line.

“It was just very touching that the Marines were there,” says his mom. “They picked him up and everybody was cheering and just giving them support and Ben support.”

Ben was discouraged and a little embarrassed that he had to be carried but his mom told him he should be proud:

“We want to give him the message that he can do anything, and he has an inspirational story, and he just needs to be thankful that he is able to do it because there are a lot of kids out there that are still fighting cancer. We just want him to get out there and participate in life.”

She hopes Ben can be an inspiration to other kids — especially those facing amputations — to show them there is life after cancer.

Click here to follow Ben Baltz’s story. You can also hear more from him when he joins HLN’s Evening Express Thursday 5-7 p.m. ET.

Many thanks to Ben Kruggel for snapping these awesome shots and uploading them to CNN iReport!