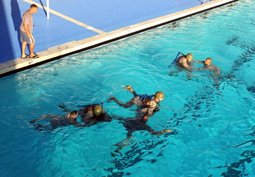 MARINE CORPS BASE QUANTICO, Va. — Whether it’s a swim meet or Marine water survival qualification, Sgt. Seth Handy, an instructor of water survival at Marine Corps Base Quantico, knows what it takes to get to the finish.

“When I hit high school, I started swimming a lot,” said Handy. “I ended up joining the team, and my freshman year was horrible, because I couldn’t even swim the length of the pool.”

For some, the challenge and frustration of being behind their peers would cause them to quit, but not Handy.

“I had problems breathing, and it took a lot of time to get comfortable with it,” said Handy. “I spent a lot of hours in the pool; nonstop swimming,” said Handy.

His drive paid off.

“By the time I was a senior, I was competing for state, and it just went on from there,” said Handy.

He was offered a spot on Indiana University’s swim team, but he chose another path.

“I decided to join the Marine Corps,” said Handy. “Out of nowhere, I walked into the recruiter’s office and said, ‘I’m your man.’”

Handy joined as an artilleryman in 2007, but it wasn’t long before his aquatic talent was discovered.

“Someone from my old unit figured out I could swim, and they suggested the Marine Corps Water Survival School,” said Handy. “I gave it a shot, and it was very challenging.”

His swimming background enabled him to be comfortable in the water, but it didn’t help in all aspects of the new challenge.

Handy adapted to the survival techniques and earned his certification in July of 2009. After two years of training Marines in the pool, he decided to take it a step further and get his certification as an instructor trainer in 2011.

In addition to teaching Marines how to be effective swim qualification instructors, Handy is also one of the Marines responsible for training new lieutenants at The Basic School in Quantico. These aren’t your average survival swim qualification courses.

“The noise can get frustrating, because when you get 300 people in one room, the place can start to echo, and the voices get very loud,” Handy said. “It does get very nerve-racking, but if you control the situation, there’s usually not a problem.”

While trying to manage 300 lieutenants can be a daunting task, Handy isn’t the only one facing challenges.

“Some have problems going off the tower, but usually it’s because they’re afraid of heights or afraid of swimming,” Handy said. “It’s hardly ever both, and once you sit them down and talk to them for a little while, they start to trust us, and at that point, they feel comfortable to jump.”

Helping Marines overcome their fears is what Handy loves about the job.

“It’s a great feeling knowing you taught someone how to survive in the water,” Handy said. “If you get Marines who freak out every time a splash of water hits their face, seeing them get comfortable in the water is relieving.”

For the Marines who need extra attention, Handy is the man for the job, said Sgt. Trevor McLaren, an instructor trainer of water survival who works along side Handy.

“He does a lot of afterhours stuff with the Marines,” said McLaren. “He’s not afraid to come in on a Saturday to make sure Marines get trained up — he’s very hard working.”

His passion for the job has made Handy very knowledgeable, and no one knows that more than his best friend and fellow instructor trainer, Sgt. Trevor Mann.

“Handy knows a lot about the water survival program,” said Mann, a fellow MCIWS instructor. “Whenever I have questions on anything, I call him up, and he always gives me the straight answer.”

“Off work, he’s pretty reliable too; we hang out a lot.” In between laughs, Mann added, “He’s halfway decent; I’d put him at a four out of ten.”

While Mann relies on Handy’s expertise, Handy also has Mann to thank.

“We’ve been best friends since we were one year old and grew up a mile apart,” said Handy. “He signed the papers before I did and was part of the influence of why I joined.”

The team of three share jokes and laughs, but they take their duty as swim instructors very seriously.

“I know of people who have survived helicopter crashes because of water survival training,” Handy said. “There are a lot of things that we teach our instructors that they teach to the fleet Marines, that way if they’re ever put in a life-threatening situation, they can survive.”

Some Marines believe water survival is unnecessary because of the location of recent wars, but Handy begs to differ.

“It might be a desert environment, but Marines have drowned in Iraq and Afghanistan,” Handy said. “You can take it anywhere, whether you’re on ship or fording rivers.”

Whether it was training after-hours to become a better swim competitor in high school or working on Saturdays with Marines who need extra help, Handy does what it takes to overcome challenges and in the end, save Marines.