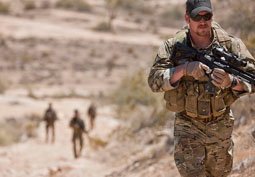 “The Life and Legend of Chris Kyle: American Sniper, Navy SEAL,” to be published April 23, will chronicle the life of the celebrated sniper who was himself shot and killed by another veteran in February.

Kyle was known for being an expert marksman who survived four tours of duty in Iraq. On Feb. 2, he was shot and killed by the mentally ill veteran Eddie Ray Routh, whom he had tried to befriend and help. Kyle and his friend Chad Littlefield took the troubled ex-soldier to a remote shooting range in Erath County, when Routh turned his weapon on the two men and killed them before fleeing in Kyle’s truck.

Mooney, a magazine writer who lives in Dallas and contributes regularly to Grantland, Outside, GQ and D Magazine, has long been fascinated with Kyle’s story. Mooney had actually been reporting on him for a feature story for over nine months before Kyle was killed.

“Chris Kyle was already a legend as he lived, and our fascination with his life and service has only grown,” John Parsley, executive editor of Little, Brown, told Page Views. “There’s a deep demand to know more about Chris’s story, and given that Michael Mooney’s reporting was ongoing when Chris was killed, Mike was able to ask him questions we all wish we could have.”

D Magazine published an in-depth article on the subject by Mooney on March 21. However, the e-book will reportedly go beyond what’s in the article to offer a rounder sense of Kyle’s life and death.

“After talking to a lot of his friends and family, and looking at all the material I had from my time with him, and everything I’d learned about his death, there were just so many stories from so many different parts of his life, I had way more than could fit in the magazine profile,” Mooney told Page Views.

In the e-book, Mooney will discuss Kyle’s work with veterans suffering from post-traumatic stress disorder and will reveal previously untold anecdotes about Kyle’s childhood as well as his time in high school and in the rodeo (Kyle grew up with two dreams: to be in the Marines and to be a cowboy).

And Mooney will also breaks news by reporting on the possibility that Kyle killed two men in self-defense in rural Texas — an incident authorities may have swept under the rug.

“Publishing as an e-book original helps Mike get almost a year’s worth of journalism right into readers’ hands and shines new light on a real hero,” Parsley told Page Views.

“It seems to me that these two very different soldiers, with profoundly different temperaments and experiences, came together in this doomed way. I wanted to tell the whole story, and that is part of the story,” Mooney said in a press release.