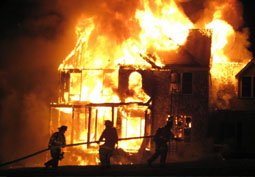 Late one spring night, my daughter Elizabeth woke us up with screams of “Fire! The house in on fire!” My wife and I got up and walked into the hallway, which was filled with smoke. We got our youngest son Erich from his bedroom and the four of us descended through the thick smoke and out of the house. But when we got there Elizabeth was missing. I was told that Elizabeth had gone back inside to get her cat. I went back into the house, calling her name, and went to her room. I couldn’t see anything so I felt around and kept calling out her name. She didn’t answer and I couldn’t find her. I had to crawl down the stairs and back out of the house. To my surprise, there she was with the others on the sidewalk. Still one missing!

Our oldest son had a bedroom on the first floor in the back of the house. I sent the family to our neighbor’s house and went to find him. I ran to the back of the house and to the outside of the missing son’s room screaming his name. I smashed out a window with my fist and tried to climb in, but the heat and smoke drove me back. I broke through another window, thinking that the smoke would go out the other window, and tried to climb in again but was driven back. All I could do was stand there screaming his name. At that time someone found me and told me that he had been at a friend’s house and was heading home. I then went to the front of the house and just stood looking, wanting to do something. A neighbor pulled me away and brought me to his house where I found my family being cared for. They were covered with soot and looked awful. An ambulance took us to the hospital and we were given oxygen. We were told that the Red Cross had arranged a motel room for us for the night, so we found our way there. We showered and didn’t sleep, but sat around trying to grasp what had happened.

The next morning at dawn, I went back to the house. One cat had died in the fire and one was unaccounted for. The house, garage, and the two cars that were parked next to the house were in ruins.

We spent the next two nights at one neighbor’s house. Another neighbor offered us the use of her house for following week, while her family went on vacation. After that we moved into a motel. We hunted for a local place to live so that the children could go to the same school and have the same neighborhood friends, but couldn’t find one.

Dear reader, this was a very tough time for us. Yours truly was at the end of his rope. I could see that the family desperately needed a place to settle down, but I couldn’t find a place to live. By chance, I remembered that a nearby church owned the vacant house next to it. One night as it was raining, I went to see the congregation of the church during their bible study night. I sat in the back to wait until they were done. They stopped their study and asked if I needed help. I said yes, but that I preferred to wait until they were done. When they were done, I asked who I should talk to about the house and was directed to the deacon. I presented my case and he said he would think about it. His wife was there and looked me in the eyes. After a short pause she said that we could live there. The deacon just looked at her and said, “I guess that’s it then”. They drove away and I started to walk back to my car. Suddenly, for no reason, my legs gave way and I dropped to my knees. I knelt there in the rain crying from relief. We moved in the next day.

The entire Town rallied to our side. People gave clothing, furniture and money. One man even gave us his car. I remember that when I thanked him that he said, “We’re all connected right?” The local school children collected cans to raise money for us, and the local stores had jars to gather donations. One neighbor arranged for a local television station to air our story and gather donations. Everyone gave.

About three weeks after the fire, I was driving through the village. A man was sitting in a stalled truck at the intersection, blocking traffic. I pulled over, and we pushed his truck off the road. I had jumper cables with me and we were able to start the truck. He told me that he was from another state and had just bought the truck and he was headed home. He pointed at a car that had pulled up near us, and I could see what I presumed were his wife and child waiting in it. They looked tired and hungry and so did he. He was concerned that the truck would stall out again. I gave him the jumper cables and told him that if he was ever in the neighborhood again, he could drop them off. He asked where he could drop them off. I pointed at my burned down house and said, “Well, I used to live there, but you can drop them at my neighbors house right there.” About a month later, my neighbor gave me those jumper cables back. She said that when the man dropped them off, he started crying. Apparently, he was overwhelmed by the fact that I would give him something after I had lost everything else.

Four weeks after the fire, I was where the burned house stood and was planning the new one. I was talking to my son, and started talking about the cats that we had lost. I was talking about one of the cats, mentioning him by name. This very same cat suddenly appeared out of nowhere and sheepishly came to us. He was very frightened. We brought him back to the family and he settled in with us.

We decided to put up a modular home where the old home had stood. A modular home is assembled in one day, the various parts of the house fit together like giant Lego pieces lifted into place by a crane onto a prepared foundation. The night before it was to be assembled, I received a call that my mother had passed away. I drove across the state to where she lived, just to be near where she had been. When I got back home, they had assembled the house, and my family took pictures of the event for me. After one month we were able to move in.

We lost a cat and all of our possessions in that fire. Some of them were precious. Family pictures, heirlooms, children’s keepsakes. But we saved the most important things; life and hope. If you have those, everything else will work out.