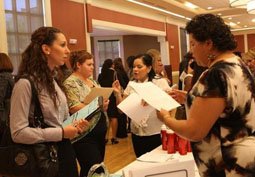 On June 5, she attended another hiring fair at Camp Pendleton — this time as the recruiter for that same company. She started the job in February, after the previous recruiter left and referred Pitts for her job.

If you’re one of the thousands of military spouses moving to a new duty station this summer, take advantage of every possible resource, like Pitts did. Chances are you’ll be competing for jobs with many jobless permanent residents of your new community.

But the rates vary by area. The Southwest and Plains states have some of the lowest unemployment rates, and a large number of cities in those regions have unemployment rates under 6 percent, says John Challenger, chief executive officer of Challenger, Gray & Christmas, a national outplacement consulting firm based in Chicago.

Challenger points out, however, that it’s not worthwhile for military spouses to worry too much about the local unemployment rate: “You’re going to go where you’re going to go.”

You’ll boost your odds of landing not just a job, but a job you really want, with a full-bore, focused search that starts as early as possible, and pulls out all the stops to use every resource and network available.

“Don’t try to do it by yourself,” says Deana Garcia, employment readiness program specialist at Fort Bliss, Texas. “Use our resources. We have employers contacting us all the time saying, ‘We want a military spouse for this position,’ ” she says.

Each spouse’s job search will be different, depending on his or her career field and new location. For example, in the El Paso area near Fort Bliss, there are many jobs in the medical field — nurses, technicians and administration positions, Garcia says.

“I had a great mentor in Lana,” Pitts says. After the hiring fair in October, she stayed in touch with Massimini, and with that insurance company recruiter. She volunteered on base to keep her skills current, and took a Microsoft Office course funded by the Federal Workforce Investment program. She was persistent and motivated.

The employment assistance program connected her to a support system of other spouses going through their own searches. In the meantime, she accepted a retail job on base that wasn’t her ultimate goal, but gave her the flexibility to pursue that goal.

“Employers are more apt to hire workers who are already working,” she says, while those out of work six months or more seem to be falling behind.

“Military spouses have dealt with long-term unemployment bias forever — we called it PCS,” says Kloeppel, the wife of a Navy retiree.

In that kind of environment, spouses may need to rethink “gap jobs” they may not have considered before, or volunteer in a meaningful way to keep skills current, she says.

Get a fast start

Spouses should start their search early — before making a permanent change-of-station move, if possible. Installation employment service providers, generally at the family centers, can help you before a move with essentials such as updating your resume and brushing up on skills, and put you in contact with their counterparts at your new location.

For example, in El Paso, the pay may not meet spouses’ expectations. “The salary is lower than someone expects coming from the East Coast,” Garcia says. So they advise spouses to list a lower minimum salary requirement to increase the number of job referrals to employers.

If you enjoy your current job, there’s no harm in asking if your company could transfer you or let you work virtually — and your employment readiness office may be able to help you design a proposal to present to your employer. Employment counselors are also available through Military OneSource who help with this and other issues and questions.

“Most people find jobs through relationships they’ve had with former employers, neighbors, organizations and others,” Challenger says.

“But when you move to a new community, those networks are bare. The key is to engage quickly. Get quickly involved in the community, churches, charities, military organizations.”

The Defense Department has taken a more proactive role in the past few years to help spouses connect with companies, knowing there are companies that want to hire them.

About 1,500 spouses are hired each month through the Military Spouse Employment Partnership Program, says Meg O’Grady, director of spouse education and career opportunities for DoD’s office of military community and family policy.

At MSEP’s core is a job portal with thousands of vacancies posted by 160 companies and organizations that have committed to hire military spouses through agreements with DoD. About 30 more are expected to join later this year, O’Grady says.

Two years into the MSEP program, spouses are beginning to see benefits beyond their initial hire, O’Grady says. As part of the agreement, employers try to help spouses keep their jobs — or find another job — when they relocate.

“Now we’re starting to see military spouses picking their jobs up and taking them with them, or finding another job with their employer, or a job with another MSEP partner,” she says.