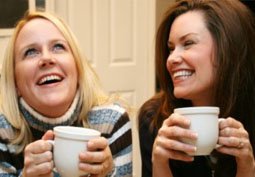 Stephanie Mello, a mobilization and deployment specialist for Army Community Service, teaches family programs, and she was my instructor for a Care Team course in August.

For civilian folks, care teams are groups who offer services to families who have undergone a huge event, be it the birth of a new baby or the death of a loved one. The issue can be a touchy subject, and many people don’t wish to think about the possibility of a difficult situation.

Throughout the two hours I spent in the course, Mello became an inspiration to me, a new military spouse.

As she deftly handled the subject at hand with sensitivity and humor, Mello revealed herself to be a wealth of knowledge on the role I found myself in a mere six months ago.

Not only was she a spouse for 20 years, but she’s a veteran herself and a writer.

When asked for advice on the subject, like in her classes, Mello is straightforward.

“Pocket your personal emotions,” she said. “Whatever happens in the Army … it’s part of the duty, honor, country commitment you both made.”

She urges spouses to respect this commitment and see the challenges, rather than the tribulations.

“A challenge can be breached and overcome. Tribulations are … rarely met with positive ends.”

Overall, flexibility and resiliency are of the utmost importance.

“Identify and acknowledge what you can and cannot control and get comfortable with both.”

That may be easier said than done, but sometimes hearing those words from someone who has been in your shoes before can make all the difference.

After I took her course, Mello gave me a copy of her book, “Once in a Wifetime,” a compilation of stories about life as a military spouse.

She wrote the book after realizing the representations she read of typical Army spouses did not reflect her experience.

As for her success, Mello cites the cooperation and support of her soldier in managing their life as a dual-military family, as well as the support and care of her fellow spouses.

“It is a lifestyle that I miss, but not a decision that I regret,” she said of ultimately leaving the military.

Today, Mello enjoys what she does and it shows.

“No two days are ever the same,” she said. “I get the opportunity to use what I have lived and learned to make a difference in the lives of others in a productive and positive way — and some days I actually do it.”

Did you have a MilSpouse mentor?