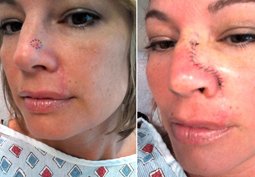 Kim Benz, a Texas artist and mother of two, remembers the angst she faced before undergoing surgery for skin cancer on her face.

“I was worried about scarring,” she said, “I went through a little bit of depression, worried about if it was never going to heal nicely.”

Benz — who now uses makeup to hide her facial scars — had been a regular indoor tanning bed user since the age of 17. She was first diagnosed with skin cancer — normally seen in older adults — in her early 20s.

After failed attempts to cure her tumors with medications, she underwent surgery — twice — to remove her skin cancers.

Benz, now 39, still has disfiguring skin cancer lesions over her entire body that she said garner stares and comments from others.

“I’m going to be fighting this for the rest of my life,” she said.

A self-proclaimed former “tanaholic,” Benz is not alone in her skin cancer experience. Indoor tanning increases the risk of two types of common skin cancers, especially among those exposed before the age of 25, a new review of previously published studies shows.

This international study, published Tuesday in the journal BMJ, combined the results of 12 studies on nearly 81,000 people.

By comparing the data linking indoor tanning and skin cancer, researchers estimated that the activity may account for more than 170,000 cases of non-melanoma skin cancers — basal cell and squamous cell carcinomas — in the United States each year. In particular, exposure to indoor tanning before the age of 25 was linked to an increased risk for basal cell carcinoma, according to the study.

These findings show that “indoor tanning is dangerous, especially for young people,” said study senior author, Dr. Eleni Linos, assistant professor in the department of dermatology at the University of California San Francisco.

There are several types of skin cancer, according to the National Cancer Institute website. Basal cell carcinoma and squamous cell carcinoma form in the higher layers of the skin, while melanoma originates in the cells that create pigment. It is melanoma that is the most deadly form, but non-melanoma cancers strike many more Americans — more than an estimated 2 million in this year alone. Linos added that non-melanoma skin cancers affect nearly one in five Americans over the course of their lifetimes.

“With this study, we finally have strong evidence that tanning beds contribute to all types of skin cancer including basal cell, squamous cell and melanoma,” Linos said. “The risk of all three types of skin cancer is significantly higher in young people. This means there is a clear cancer risk for teenagers who use tanning beds, and it’s hard to argue with regulations to protect children from cancer.”

She said that while non-melanoma skin cancers are less deadly, their impact is enormous.

“Their treatment adds up to the fifth-most costly cancer for Medicare,” she said, citing research that showed that the cost of diagnosing and treating these types of skin cancers ranges from $1,200 to $2,100 per case.

And the cancers can also be disfiguring, as Benz’s case shows.

Cancer experts not involved with the study called the findings startling.

Read the full story and watch the video here.