In Praise of Holly Petraeus & Other Military Spouses 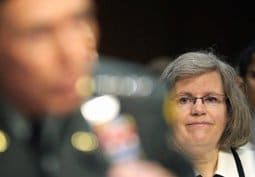 The recent Veterans Day weekend has been overlaid by a scandal hanging over one of our veterans, the much-lauded Gen. David Petraeus, whose resignation as director of the Central Intelligence Agency comes after admitting to an extramarital affair, reportedly with Paula Broadwell, his biographer. Like Petraeus, Broadwell is a graduate of the United States Military Academy. Like Petraeus, Broadwell is a married parent of two.

Neither one of them has ever been a dependent military spouse.

I’m talking about “Army wives” and Army husbands, too—meaning those of us who do not take oaths of military service, but who do stand by our men and women. While we honor our servicemen and women, we often forget that many service members marry men and women who do not themselves wear a uniform but must live by the oaths their spouses take. Even though Hollister “Holly” Knowlton Petraeus grew up as “West Point royalty” (her father, Gen. William Knowlton, was the superintendent of the United States Military Academy during Petraeus’s years as a cadet), when she said “I do,” she gave up her own dreams and began following his.

You might wonder how this is different from a person who marries a doctor or any professional whose career requires moves from place to place. I can tell you that it is, because I am a military spouse: Few other marriages involve a beige Dependent Spouse ID card that is necessary for everything from grocery shopping at the post commissary to emergency-room care at any hospital. From my own personal experience as the wife of a West Point cadet, I can tell you that the indoctrination starts early: If you are married in a traditional military ceremony, after your saber arch has formed and you’ve walked through it, the last person will turn his saber flat, whack you on the backside, and yell “Welcome to the Army, Mrs. Patrick!”

The assumption is, from the moment the vows are finished, that a military spouse will “fall in” with whatever her spouse’s career needs. The old joke is that “If the Army wanted you to have a wife, they would have issued you one;” in other words, you’re expendable, and might be troublesome. Women whose love for a soldier transcends their discomfort with field conditions were once known as “camp followers.” Over time, the military adjusted. Pensions were granted to war widows, housing was added to posts and bases, and services provided for the children of military marriages (although the appellation “brats” has never left them). The military is still adjusting, of course, and Holly Petraeus has been an amazing part of that change in her efforts to help families learn more about their consumer rights.

In return, military spouses receive some rights—but not as many as they could or, in my opinion, should. Moving expenses are paid. Medical, dental, and other benefits are supplied. Many military communities are tight knit and offer the kind of support that many Americans believe no longer exists.

But there are so many stresses, from the known, like loneliness during deployments, to the unspoken, like pressure to participate in neighborhood bible-study sessions that are unique marks of military spouses compared to others. Although First Lady Michelle Obama has publicly supported military families and made some strides in focusing efforts to get them more resources, neither she nor any person who has not walked a mile several paces behind a military rank will ever know what it means to always come second, to always be the “dependent” family member, to always compromise if you know that you’re married to someone whose star (or stars, in the case of Petraeus) is ascendant. The greatest stress, of course, is the worry that one day a service member may not return.

However, there’s another facet to life as a military spouse that may be less overwhelming than the fear of a beloved partner’s injury or death—but can affect life in both wartime and peacetime, and that is the concept of what military spouses give up when they marry. In our current society, moves and deployments are frequent at all levels in all military branches; after all, ours has been a nation at war for nearly nine years. Army wives and husbands must be ready to consider whether or not to leave housing, support systems, and employment at a moment’s notice. Even if a military spouse chooses not to make a move, if she is living in government quarters, she’ll have to find new housing if her husband is reassigned.

These potentially sudden and frequent changes can wreak havoc with an “Army wife’s” household management, personal equilibrium, and—oh yes—work life. Once upon a time, the women who married soldiers prided themselves on being full-time wives and mothers, but even before David and Holly Petraeus married in 1974, military spouses were employed as teachers, nurses, administrative assistants, and commissary cashiers. Today, they’re doctors, lawyers, college professors, accountants—and also teachers, nurses, administrative assistants, and commissary cashiers. In other words, things are changing for the better for military spouses, although great strides remain to be made in making their lives as viable as those of their active-duty “sponsors.”

Check out my site