In My Own Words: A MilSpouse (Part 3) 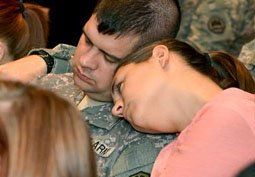 I waited six months, 30 weeks, 210 days and 5,040 hours to see my husband again. It was finally here — the day I’ve been waiting for — the day I pick up my husband as he returns from deployment. I was beyond ready.

The last week of the deployment was the biggest tease I’ve ever experienced. I call it “the waiting game.” I tried to stay busy by making each day a different mission. One day was hair and nail appointments. The next day was grocery shopping or picking out an outfit.

The following day was cleaning the house or washing his car, and so on. Even though each day had an agenda, I still found myself sitting and impatiently waiting for his arrival day to come. Finally, it came. It was the last night I was forced to sleep on my own, even though I wouldn’t call it sleeping, I was way too excited.

I woke up that morning, of course at the crack of dawn, speaking to my husband who had finally made it to the states. He told me he would be at the base around 4 o’clock. OK… got it, and the day began.

Even though I knew everything was already prepared and perfect, I proceeded to clean again making sure everything was in the right place and sparkling.

Then it was time to get myself ready, first was my hair appointment. I thought various tasks would make the time go by faster, but they didn’t. I remember I got dressed and ready hours before he was due back. Just waiting and being so excited was almost making me sick.

Then I received a text from my husband saying that he landed safely in El Paso and was headed this way.

I hurried up and did some last minute touch ups to my hair and make-up, and I headed to the fire station on base. There was a small gathering of people to welcome the six firefighters, including my husband, who were returning.

I paced and shook in excitement as I tried to stay distracted till he got there. A million things ran through my mind, “Do I run, jump, walk, skip, or do I tackle him?” All I knew is I was going to hold on to him, and I wasn’t going to let go. As I stood there contemplating my actions I saw it, the van. My stomach dropped as it pulled into the parking lot.

The door opened, and luckily for me my husband was the first person out. Without hesitation or thought I ran, and I jumped. The feeling of him actually being here and touching him was so overwhelming I began to cry.

He laughed and just held me tighter and kept saying “I’m here, I’m here.” Finally, I let him go long enough for him to greet his friends and grab his bags. Then we were on our way home.

It was almost like I wanted to show him everything all over again even though he lives there and knows where everything is. I showed him some changes I made to the house and showed him the pile of presents I’d stacked up for him while he was gone.

I was so excited I started to open them for him, and he just laughed and thanked me for all the hard work I’d done. We sat on the couch and I just sat there, holding on to him not wanting to move. It will always be one of the best feelings I have ever experienced.

I was informed by others that have gone through this experience that I needed to take things slow and let my husband adjust to being home, sleeping and eating habits, and even small things like an item in the house that’s in a different location than when he left. I prepared for that, but it wasn’t needed. Within two days he was sleeping on a normal schedule, and never once was concerned about anything I’d moved. It’s like he never left, and things went right back to normal. Except the excitement I was still feeling.

The feeling I had the day I picked him up still hasn’t left me. Every day I can’t believe he’s home after all the waiting. I sit at work and wait excitedly to go home and spend time with him. I hate when he’s not around. I was told this might happen, and my husband and I will have to adjust, more so adjusting on my part. I didn’t want to be the clingy wife, but it’s so hard after someone has been gone for so long, definitely something I’ll need to work on.

All I can remember is that first night alone and the many more that followed. I remember saying this is never going to end, and I thought time was going to move slowly, but it didn’t.

To my surprise, it went by shockingly fast. I now know how to handle a deployment and will be ready if there is a next time, but for now, I’m going to cherish every day and moment I have with my husband.