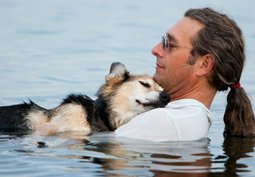 The unconditional love of a dog is a powerful thing. Just ask John Unger of Bayfield, Wis.

For the past 19 years, Unger’s loyal companion has been a shepherd mix named Schoep. Unger learned two weeks ago that his dog had severe arthritis and may need to be put down soon. He was devastated — and also determined to help alleviate Schoep’s pain.

Unger knew that people suffering from arthritis respond well to water therapy, so he brought his aging dog to one of their favorite spots: Lake Superior. His idea was to take advantage of the lake’s higher-than-average temperatures this summer and let Schoep feel weightless and relaxed. Considering the grim prognosis from the veterinarian, Unger also called his photographer friend, Hannah Stonehouse Hudson, to see whether she had time to capture a special photo of Schoep just in case.

Stonehouse Hudson met them at the lake for about five minutes and snapped a few shots. A few days later on Aug. 1, she uploaded her favorite image of the man and his dog to Facebook — and an Internet sensation was unleashed.

As of Thursday, the photo on her Stonehouse Photography Facebook page had nearly 300,000 likes and 32,000 comments. Since the photo went viral, Unger has been trying to adjust to his sudden popularity.

Read the rest of this amazing story here.