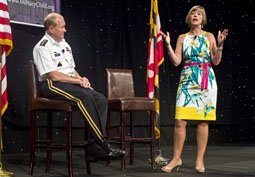 NATIONAL HARBOR, Md., July 8, 2013 – Military children are a great strength of the armed forces, the chairman of Joint Chiefs of Staff said today at the kickoff of the Military Child Education Coalition’s 15th National Training Seminar.

Army Gen. Martin E. Dempsey told teachers, school liaisons, program directors and other professionals that he wanted to have a “conversation” with them on the importance of supporting the military child.

Interacting with attendees in a question-and-answer format, the chairman and his wife, Deanie Dempsey — who have three children and seven grandchildren — began by emphasizing the need for good education.

“I think what makes us the strongest democracy in the world is education,” Dempsey said. “The strength of our democracy is education. There’s no question. In fact, it’s a precondition for democracy, I think.”

Deanie Dempsey said the education children get by being part of the military and moving around is “pretty significant,” adding that her family was in Germany when the wall that separated the former East and West Germany came down.

“How many kids can say they were there for that,” she asked.

The chairman also said it’s important for the nation to discuss how history will regard the men and women who have served in the last 10 to 12 years at war, and the audience should be aware of how that perception will impact the children of those veterans and service members.

“The image of the institution and the image of those who serve is also reflected on our children in how they represent this great country, this institution, in the schools in which they attend … and just [in] the way they carry themselves,” he said.

And while there are struggles at times, military children are “amazing kids,” Deanie Dempsey said.

She also stressed that parents must be advocates for their children, recalling the mother of a military child whose father was overseas. The boy wasn’t doing well in school. The staff researched the roster of students and found it had 13 military children of deployed parents. The staff formed a support group just for them, and the boy’s school experience turned from negative to positive.

“The more we reach out to them, the better off we all are,” added Deanie Dempsey, who earned a master’s degree in education.

The Dempseys said it’s also vital to stay positive for children’s’ well-being during a permanent change of station, which often take place in the summer months.

“But your children will reflect you. If you’re positive about the move, they will be. If you’re not … they won’t be,” the general said.

Deanie Dempsey told the audience that her family looked at permanent change of station moves as a sort of vacation.

“As many of you know, there weren’t ever many vacations,” she said. “Of course our PCSs back then, you didn’t have the movies in the car and stuff like the kids have today, which is great.

“So we’d play the license plate game. We’d sing Irish songs — my kids all grew up singing Irish songs. So you’d do that for however many hours you were in the car.

“But we’d try and stop — well, we’d try to make it a vacation-ish kind of thing,” Deanie Dempsey said.

The chairman asked for the audience’s help with letting leaders know during the conference what’s happening with military families.

“This particular ‘portal’ into the challenges of military families and in particular, children, is really important as we do confront a future with some uncertainty,” he told the attendees, encouraging their input on the needs of military children.

“After Vietnam, Desert Storm and the 9/11 decade, it’s been a bit of a roller coaster, but we’ve always figured it out,” the chairman said.

No decisions have been made to cut military children’s programs, Dempsey said. “But if you’re asking me ‘Is it likely we will scrutinize all of those systems we’ve for the most part taken for granted over the years?’ the answer is absolutely, we’ll have to,” he noted.

“I think we can make a case that full sequestration would be a bad idea for the nation, not just for the military,” the general said.

“The entire enterprise is under scrutiny in order to find a way to provide the nation with that which it needs in terms of security at reduced levels of resources,” he said.

“We’re not exactly sure how deeply those resources will be reduced,” he continued. “Of course, there will have to be changes made in family support programs,” the chairman added, but there would be an effort to reach out to understand what the community of interest believes is most important.

“We’re not going to do this from Washington with the famous 6,000-mile screwdriver and — and come to any conclusions ourselves,” Dempsey added.

“So the thought process is, instead of five kinds of programs out there, why not put the resources and make two really good ones? And you’ve still got what you had in all five, but just in those two,” Deanie Dempsey noted.

The Dempseys said it is important for the audience members to let them know which programs are necessary, and to take a serious look at all their programs and focus on those that would benefit everybody.

The general expressed his gratitude for the work the audience participants do with military children.

”If you ever wanted to lead at a time when it’s important, not just for the military, but for our country,” the chairman said, “you’re in the right place at the right time.”