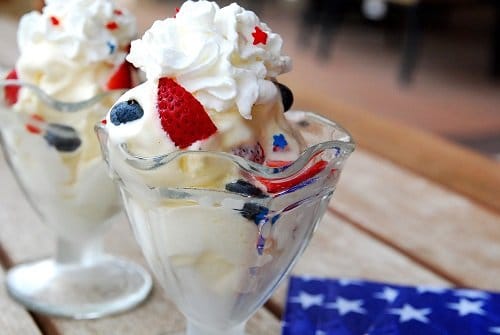 Think there’s no dessert more American than apple pie? Then it might surprise you to learn that George Washington spent $200 on ice cream in a single summer — that’s more than $5,000 in today’s market! Or that Thomas Jefferson studied ice cream-making in France before returning to the States with an ice cream machine, several ice cream molds, and a handwritten recipe for vanilla ice cream now archived in the Library of Congress.

Since the early days of America began with a love of ice cream, it makes sense that the U.S. Military would have just as big of a sweet tooth. In fact, ice cream has been cited by dessert-loving historians as a key factor of the U.S. Military’s success in World War II. 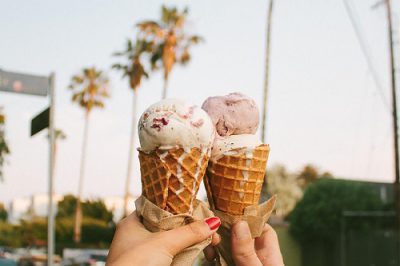 Before World War II, the Military’s ration menu focused on getting soldiers enough calories to keep up their strength. The domestic sale of meat, wheat, sugar, and fat so more could be sent to Military kitchens overseas. These restrictions affected the ice cream industry by requiring they reduce the production of their delicious product to conserve milk and sugar. The industry tried to speak out against the regulations, asserting that their sweet and creamy commodity was key to keeping up morale among the troops.

Their protests went largely overlooked, however, until the prohibition of alcohol in the 1920s when the celebration, comfort, and diversion typically associated with alcohol were reassigned to ice cream. William Dreyer, the founder of Dreyer’s Ice Cream, helped inspire this sentiment by marketing Rocky Road ice cream — an indulgent chocolate base with “rocky” chunks of chopped nuts and marshmallows — as a sugary metaphor for finding comfort within the difficulty of the 1929 stock market crash.

By the time World War II hit, ice cream was an incontestable comfort that the U.S. couldn’t bear to lose again to wartime rationing. Instead, they doubled down, sending the sweet treat overseas where it proved as integral to the war effort as bullets and combat boots.

Ice Cream on the Front Lines 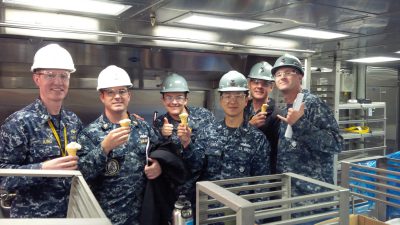 When Japanese torpedoes struck the U.S.S. Lexington in 1942, the crew had no choice but to abandon ship, but not before breaking into the freezer and eating all the ice cream. Above their heads, American heavy-bomber crews discovered that they could churn ice cream on their missions by strapping buckets of mix to the rear gunner’s compartment. The mix would freeze at altitude while being churned into a custard texture turbulence and engine vibrations. Soldiers on the ground mixed snow and melted chocolate bars in their helmets to mimic chocolate sorbet.

A few years later, in 1945, the U.S. Navy spent $1 million converting a barge into a floating ice cream factory that could hold more than 2,000 gallons of ice cream and churned out 10 gallons of the sweet stuff every seven minutes. It was towed around the Pacific, distributing dessert to ships that didn’t have their own ice cream facilities. The U.S. Army stepped up its own ice cream production by constructing miniature ice cream factories on the front lines and began delivering individual cartons to foxholes.

Ice cream played such a crucial role in maintaining high morale throughout WWII, it’s no surprise it was the treat of choice for celebrating the end of the war on September 2, 1945. Americans flocked to their freezers to celebrate with record amounts of ice cream consumption — 20 quarts per person in 1946 alone!

Next time you dig into your favorite pint of choice, be sure to thank each creamy spoonful for the honorable work it does of keeping up the morale of our brave service members around the world.