I Piddled in Running 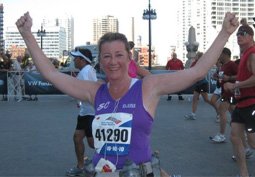 Just over two years ago I signed up to run the Chicago Marathon.

It was the craziest, most-difficult, yet most life-altering decision I’ve ever made … and I’ve never looked back.

It was a month after my husband had retired from 22 years of service in the Army, meaning he would finally be home longer than two weeks a month giving me more freedom to look after myself for a change. It was also a month after 40,000 other people and I participated in the Cooper River Bridge Run, a 10K run over the beautiful Ravenel Bridge, which connects Mount Pleasant to Charleston, SC.

My experience that day was my aha moment; you know the one when you have total clarity. For me, it was when I realized I was too old and out-of-shape to be running 6.2 miles with very little preparation. I couldn’t run the entire distance without walking and thought my legs were going to fall off when traversing the uphill portion of the bridge.

After the event, when I looked at myself in the pictures I thought, when did I get so out-of-shape and flabby?

Yep, that was me.

Old, flabby and totally discontented with myself. The race also came on the heels of my doctor telling me my cholesterol was too high.  I couldn’t believe it. I knew I wasn’t in great shape and I’d gained a few pounds, but I honestly was shocked. I was only 44 years old and being told to go on cholesterol drugs. This combined with my lackluster run got me thinking I needed to change, and fast.

I had been running three miles a couple times a week. Well, not really running. It was more like a run-walk-pant, but I considered it running at the time. While I thought it was a workout; in hindsight it was more of a warm-up. I never really pushed myself and barely broke a sweat. I knew I wasn’t making much progress weight-wise, but in my naïve mind, it was a workout.

That’s when I decided that my workout plan wasn’t working out and I needed an intervention to get back in shape. That’s where Team in Training (TNT) entered the picture. TNT is the fundraising arm of the Leukemia and Lymphoma Society. In a nutshell, participants agree to raise money toward cures for blood cancers in exchange for training and support to do an event.  I signed up to run the Chicago Marathon—26.2 miles—farther than I’d ever run in my life, much farther.

I thought, if the Biggest Losers can do it, I can too.

And so began my trek to fitness.

The training was four months and included two team runs per week and additional running on my own. The first team run was six miles with each run getting progressively longer, up to 20 miles, as we went through the training. If you’d like to learn more about my experience, you can check out my event blog here.

Physically, the running was difficult and there were days when I honestly didn’t know if I’d make it, but I was determined. I knew in my heart that my husband didn’t think I could do it, although he always supported me, so I was even more determined to prove him wrong. Every time I came home from a long run, I could see the surprise and pride in his eyes. He was just as proud as me that I’d powered through the pain to finish another run.

What really kept me going though were the physical effects running was having on my body.

I was literally watching my body transform itself. The fat on my legs was melting away and being replaced by smooth muscle. Not only was my body changing, but I felt better. I was really happy, felt great, slept great and my sex life even improved. You can’t beat that side effect.

Besides the outward benefits, I was internally better. I’d suffered from migraines for 20 years and about halfway through the training, I realized that my migraines had gone away. It was as if the exercise was a miracle drug curing all my ills.  I was becoming a believer. Another strange change was that my hair wasn’t turning gray as quickly.

I have no scientific evidence to back either of these claims, but I do know that I didn’t have migraines, and I could go longer between hair coloring appointments because my hair just wasn’t graying as fast. Also, I began to crave healthy foods. Instead of wanting chips, I wanted almonds. Instead of cereal, I wanted yogurt with fruit. It was like my body knew what it needed for energy.

The day of the Chicago Marathon I was scared—I’d never run 26.2 miles in my life. Even in training, we’d only done two 20-mile runs, never the full 26.2 miles. But when we began running, I felt great and totally prepared. Around mile 20, my cheeks were hurting and I quickly realized that it was because I’d been smiling for the entire run. There were more than 40K runners and close to a million spectators all cheering us on. I finished the marathon in just over 5 ½ hours, not fast but I was so proud that I’d done what I’d thought was impossible just a few months earlier. It was exhilarating and an experience I’ll never forget.

Driven by my desire to never have migraines again, I was determined to keep working out at a high intensity but felt that I couldn’t solely rely on long-distance running. I found a place called Charleston Group Fitness that offers small group training. It’s like having a personal trainer because the classes are so small, but without the price tag.

Having just come off a marathon, I thought it would be a piece of cake for me.

Boy was I wrong.

I discovered that despite the fact that I was in good cardio shape, I was a weakling. At my first class, I could barely do a push-up or a sit-up for that matter.  As for pull-ups, forget it!  I thought, holy crap, if I am this weak at age 44, I won’t be able to move by the time I’m 84.

So I kept going.

Some days, I thought I was going to throw up after class, but I just kept pushing myself. I was determined to get totally back in shape.

Over the course of the next 16 months, I ran, lifted weights, did more squats and lunges than I ever imagined I could and got stronger. Stronger than I’ve ever been in my life. Slowly but surely, the fat left my stomach, my arms, my legs and was replaced by muscle. Truthfully, I haven’t really even lost much weight, but my entire body has changed and the fat I had has for the most part become muscle. In fact, a couple of weekends ago I wore my first bikini in ten years. Total Satisfaction!

What I’ve learned is that the reason we can’t move when we age, is because we just stop moving. Our bodies get creaky and broken because we quit oiling them with sweat and movement. I’ve also learned that all the years my husband was deployed and I was home alone with my children that I should have made the time to workout and keep myself healthy. The excuses I made for myself were just that, excuses. I could have hired a babysitter and gone to the gym or traded babysitting with a friend, but I always had a reason why it wouldn’t work out at that particular time. My best advice to anyone who’ll listen is just get up and move and push your body. If I can do it, anyone can do it!

I have proven to myself over the last two years that our bodies rise to the occasion. If you train properly and work your way up slowly but surely, pushing past the barriers you’ve created for yourself, you can achieve what you thought was impossible.

I’m  a consultant and analyst focusing on the media and communications industries. I was telecommuting before it was cool – taking my job around the globe as my husband was transferred with the Army. I’m also an avid runner and boot camper.  I live in Mount Pleasant, SC with my husband and two daughters.