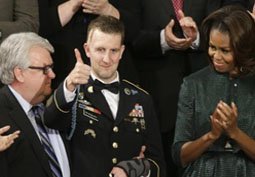 Obama used Remsburg’s story of resilience and humble service to his country to close the State of the Union address.

“Like the Army he loves, like the America he serves, Sergeant First Class Cory Remsburg never gives up, and he does not quit,” Obama said, addressing the soldier sitting beside First Lady Michelle Obama.

With the help of his father, Craig, Remsburg, who is blind in his right eye, struggles with the left side of his body and has a titanium plate in his skull, slowly stood to his feet and gave a thumbs up to the President.

The gesture was a testament to the courage of the 30-year-old from Gilbert, Ariz.. who has been awarded the Purple Heart and Bronze Star.

Obama first met Remsburg in June 2009 during a reenactment of the D-Day paratrooper jump into Normandy during World War II.

“He walked me through the program — a strong, impressive young man, with an easy manner, sharp as a tack,” Obama said. “We joked around and took pictures, and I told him to stay in touch.”

Soon Remsburg would go on his 10th deployment overseas.

On Oct. 1 an improvised explosive device detonated near Remsburg in Kandahar, Afghanistan.

“His comrades found him in a canal, face down, underwater, shrapnel in his brain,” Obama said.

A year later, the pair would meet again in National Naval Medical Center in Bethesda, Md.

During a visit with wounded soldiers Obama noticed one of them had a photo of the President taped to his wall.

“There at Bethesda, we were meeting again,” Obama said during a speech to the Disabled Veterans of America Conference in 2010 highlighted Tuesday by the Arizona Republic.

“And Cory still couldn’t speak. But he looked me in the eye. He lifted his arm, and he shook my hand firmly. And when I asked how he was feeling, he held up his hand, pulled his fingers together and gave a thumbs up.”

Remsburg endured numerous surgeries and hours of rehabilitation and slowly regained the ability to speak and walk. Last year he was at last able to return home to Phoenix, where he enjoys cycling, according to NBC News.

Obama checked in with Remsburg during a private meeting last August.

“He wanted to show me something,” Obama said in another speech to the Disabled Veterans of America Conference, again highlighted by the Arizona Republic. “And he leaned out of his chair. And he reached out and grabbed his walker. And with the help of his parents, he pulled himself forward and he stood up.

“And he looked at me, and he gave me a sharp salute.”

“My recovery has not been easy. Nothing in life that’s worth anything is easy,” Obama said Remsburg told him.

Humble as ever, Remsburg’s father, Craig told the Arizona Republic his son hoped his presence would remind people of the sacrifices of military service.

“If he sends that message by his presence alone, then he’s done something,” Craig Remsburg, who is also a veteran, said from Washington following the speech.

“That was his take on it: If I can help others know that people are hurt and are continually going to get hurt in war, then I’ve done my job.”