How to Avoid Scams 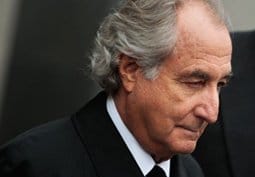 It seems that each week brings news of another financial con game to bilk unsuspecting investors out of their hard-earned savings. While the eponymous Ponzi scheme traces its roots to the 1920s, crooks have been refining the business of scamming investors since time immemorial. So when it comes to advice on how to protect your nest egg from would-be thieves, it pays to listen to one of the most notorious schemers of them all: Bernard Madoff.

The infamous swindler is now five years into a 150-year prison sentence for his role as mastermind of the largest Ponzi scheme in history, which cost investors $50 billion. He recently gave an interview to financial website Marketwatch.com in which he was surprisingly forthright about his crimes, and offered advice to help investors protect themselves from future scammers.

The most important observation Madoff related to investors should be obvious, but is all too frequently ignored or overlooked. It is essential that cash and investment securities be held by an independent, third-party custodian with SIPC insurance and significant capital resources. That means your account should be held by a bank, brokerage firm, or large mutual fund company and should not reside in the custody of the investment adviser.

This was the essential element that allowed Madoff to perpetrate his fraud; investors wrote checks directly to his firm (which operated its own internal broker dealer). The lack of independent oversight allowed for the falsification of client statements and shielded the scheme from detection until the entire enterprise collapsed. Had the investments been held separately at an independent firm, clients would have received monthly brokerage statements to compare with Madoff’s performance reports and would quickly have detected the attempted fraud or avoided it altogether.

Another useful piece of advice from the master of misdirection is to avoid complex investment schemes that are not well understood. A certain cachet attaches to investments in complicated hedge fund strategies, the details of which were unclear or even undisclosed to investors. That was particularly true of Madoff’s own scam. “People asked me all the time how did I do it, and I refused to tell them, and they still invested with me”, he said. Many victims forked over millions for a piece of the Madoff mystique without any understanding of his purported investment process. His advice: if you don’t understand it, don’t invest in it. Period.

More sound advice: make sure you can get your money out when you want, and test the procedure periodically to verify liquidity. Sophisticated investors and institutions may be capable of evaluating investment vehicles that limit withdrawals and lock up capital for long periods, but most of us ordinary investors are not so equipped. As a general rule, don’t commit money that cannot be reclaimed within a reasonable time frame and under a well-defined valuation methodology.

Madoff, 75, has recently granted interviews to CNN, Bloomberg and Fox Business and is reportedly working with U.S. Treasury officials to identify fraud on Wall Street. It takes a thief.

Christopher A. Hopkins, CFA, is a vice president at Barnett & Co. in Chattanooga.