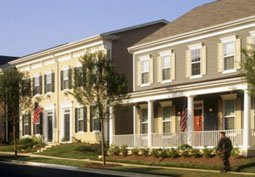 Lately, I’ve been making appointments to look at houses and condos. I’ve been taking photos of rooms and appliances. I’ve been asking nosy questions about basements: “Does it flood?,” and parking: “Is it on the street only?” I’ve been driving through prospective neighborhoods and checking out porches (no couches, good) and driveways (rusting cars on cinder blocks, bad). I’ve interviewed both landlords and tenants.

I’ve received emails and calls from good friends and even passing acquaintances who are moving to the Washington, D.C., area, just as I’m preparing to leave it, asking me to check out houses on their behalf.

Meanwhile, I called my friend, Bonnie, a military wife who lives near our next assignment to ask her to drive through the neighborhood where we hope to move. She answered questions for me about proximity to the school, the base and to her own house. These are important factors.

Another military friend lives in the home that we will soon move into, and he gave us his evaluation of the premises (spacious enough), the appliances (in good repair), the landlord (helpful) and the neighbors (quiet.)

Have I seen my new digs? No, and I probably won’t until the day I move in or shortly before. Some friends moving here from Texas, for whom I’ve looked at several houses in northern Virginia, also chose their home, partially on my recommendation, without ever seeing it. I surely hope they like it.

I hardly think twice about choosing a home without seeing it, but I’m sure the civilian population would be surprised to know the level of trust military families place in one another when it applies to finding a new place to live.

When military families are moving hundreds — sometimes thousands — of miles, we don’t often have the time or resources to make a house-hunting trip. Most of our family’s moves have been across one ocean or another, as we’ve alternated from overseas to stateside assignments, making a home-reconnaissance venture difficult to manage.

In Japan, as has been the case with many of our assignments, we took the base house we were offered upon arrival and were glad to have it. Before we left that assignment, we agreed to rent a home in Alabama that was owned by military neighbors in Japan. Before we moved from California to Germany, we signed a lease on a house in Ramstein we had never seen, on the advice of my friend, Monica. She and her husband knew friends who were leaving Ramstein. Her word was good enough for me.

Most of our dozen-plus moves have been into houses we’ve agreed to live in, sight unseen. Sometimes my husband has seen a home, and I haven’t, but more often we’re both living by faith. This is rental, not purchased, property in our case. We are not homeowners, but I have heard stories from friends who have bought a house without seeing it.

I can think of very few addresses we scouted before our household goods were already en route to them. When we moved from Alabama to Georgia, we were close enough to make a trip just to find a house. The house we chose near Moody AFB was highly recommended by my friend, Beverly, another military wife who assured me the house was a good fit for our family of five. She was absolutely right, confirming my faith in the ability of military families to size up a home and neighborhood on behalf of their cohorts.

We get by with a little help from our friends.