Homecoming Is First Step Towards Reintegration 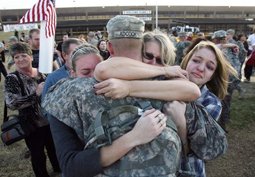 They lined the dimly-lit street and fought off the bitter winter cold. After months apart, the families and friends of Combat Logistics Battalion 2, 2nd Marine Logistics Group clung to “Welcome Home” signs and a single thought: reunion.

“I love him,” said Patricia Scruggs of Roanoke, Va., as she waited for her grandson, Sgt. Douglas Leonard.

“I just worried about him,” she said, her voice strained by nerves and the biting chill that blew through the area. “I’ve been so excited. I couldn’t sit down for the last hour.”

Word spread that the servicemembers were close. The buses turned the corner, horns blared and a surge went through the crowd.

Two hundred and ninety of the battalion’s nearly 600 deployed Marines and sailors stepped out of the vehicles and into a sea of waving arms Feb. 1. Their nearly six-month mission to support logistical operations in Helmand province, Afghanistan, was finally over.

“I tried not to think about it,” said Susan Lech of Oxford, Pa., as she waited for her husband, Sgt. John Lech. “I didn’t read any of the news stories just to keep my mind off of what was going on.”

Three waves of Marines and sailors returned to Camp Lejeune over the course of several weeks. Each group rolled onto the base in the quiet, predawn hours. The minutes ticked agonizingly by as the distance from their families slowly shrank.

“Forget the knight in shining armor,” read one sign as it waved over the mass of people. “Give me my Marine in dirty cammies.”

The peculiar odor left from their work in the field still clung to the servicemembers’ uniforms as they hugged their parents, spouses, children and friends. Afghanistan was behind them, but the unit now had a new mission to accomplish: reintegrate with their families and community.

“The [Marines and sailors] performed magnificently in Afghanistan,” said Maj. Jospeh C. Novario, the battalion’s executive officer. “I was impressed, and I think the leadership as a whole was impressed by the individual Marine’s effort, ability to focus, and perform the mission.”

The new challenge is to reintegrate the servicemembers, added Novario, a DuBois, Pa., native, as he went through the unit’s post-deployment training the week after their return.

Only a few days after their happy reunion with families and friends, the servicemembers set to work preparing their training schedules, completing medical appointments, and attending classes on alcohol, safety and family issues.

“It’s about making the right choices now,” said Novario. “The focus, effort and mission accomplishment they had in combat has to carry into the garrison environment. The same things that made them successful [in Afghanistan] will make them successful here.”

The troops spent half of a year undertaking engineering and resupply operations, completing NATO missions to train Afghan National Security Forces, and demilitarizing old installations in the country.

It is now time to reset and decompress, said Novario. The battalion’s post-deployment activities will help the Marines and sailors readjust to their lives in the states and reconnect with their families.

For more help with homecomings, check out SposueLink’s tips and ideas for a smooth Military homecoming.