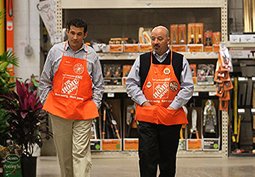 Home Depot is making its yearly hiring push, aiming to fill more than 80,000 jobs for its busiest season.

In a statement, the company’s executive vice president of human resources, Tim Crow, said, “We find some of our best associates during our peak season, and many of them have built long, meaningful careers with us.”

Spring is typically the strongest time of the year for Home Depot (HD, Fortune 500), and the move shows the company is preparing for a better season than years past.

After all, the housing market is showing positive signs. New home sales and existing home sales are up, and home building remains robust.

The Atlanta-based chain is particularly sensitive to the fluctuations of the nation’s housing market. It cut 7,000 jobs and shut down several brands at the tail-end of the recession in 2009. Since then, Home Depot has increased its spring hiring push every year, adding 60,000 seasonal associates in early 2011 and 70,000 in 2012.

Prospective employees can apply online, and military veterans can now use a recently launched application tool designed specifically for them.