Holiday Mail – The Next Surge in Afghanistan 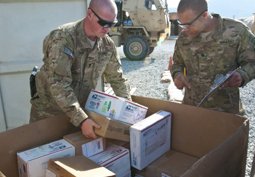 LAGHMAN PROVINCE, Afghanistan (Dec. 10, 2012) — The troop surge in Afghanistan officially ended in September, but Soldiers of the 4th Brigade Combat Team, 1st Cavalry Division, are preparing for another surge that will arrive in country over the next three weeks: holiday mail.

Each year the United States Postal Service publishes a deadline for sending mail from the U.S. to troops in Afghanistan with a reasonable chance of it arriving before Christmas.

This year that date was Dec. 3. Now that the date has passed, the mail handlers of the “Long Knife” brigade prepare to process the many packages, cards and letters.

About 600 pieces of mail are processed each week at Forward Operating Base Gamberi, said Spc. Terrence Burgess, the mail clerk for the installation that houses more than 600 people. He expects that number to get larger as Christmas gets closer.

Burgess, a native of Morgan City, La., and one additional mail handler, both on their first deployments, are responsible for receiving, processing, and distributing all of the mail that comes to this forward operating base, or FOB.

To get from a post office in the U.S. to a FOB in Afghanistan, mail gets routed through a system of civilian and military agencies that move the mail by truck, plane, and boat. Eventually, usually two to three weeks later, the mail arrives at the correct FOB in Afghanistan.

To deployed Soldiers, mail matters. A lot. It is a tremendous morale boost to get letters, cards, and especially packages.

“The mail here is important. Someone may be waiting for a pillow from home to sleep on, a picture of their family, or a favorite snack,” said Burgess.

With the instantaneous communication capabilities of tools like email, Facebook, and Skype, there are certainly fewer cards and letters these days than in times past. But no electronic communication device can take the place of a box from home, because the things Soldiers want and need cannot be emailed or “Skyped.”

“Sometimes it’s hard to buy soap and shampoo here. It’s good to be able to have it mailed,” he said.

In an era in which Soldiers can order things online for themselves from online retailers, some things are still best handled by loved ones rather than retailers.

Burgess especially enjoys getting simple cards from his dad and teachers from high school.

“I’m still close to a bunch of my teachers and my basketball coach. It’s great when I get cards from them,” he said.

Though Burgess has had training in mail handling procedures, it is not his primary job in the Army. Normally, Burgess works for 5th Battalion, 82nd Field Artillery Regiment, 4th Brigade Combat Team, 1st Cav. Div. This is an additional duty that he embraces, because every day he sees the importance of what he does.

“I didn’t expect to come out here to do mail, but I like it. I meet a lot of people and it definitely brings up morale,” he said.

Of course, the packages often contain things more emotional than just cookies, candy and shampoo. Many boxes carry photos of wives, husbands and kids. Some contain special Christmas gifts for the deployed Soldier.

Sgt. 1st Class Blake Constantine has a small package wrapped in red paper displayed prominently on a storage box in his office next to his desk. Taped to the package is a small piece of paper with the crayoned writing of a child.

“I won’t open that until Christmas Day. It’s from my seven-year-old son. It doesn’t matter what’s in it. It really is the thought that counts,” said Constantine.

All of these snacks, toiletries, gifts and emotions are carried in boxes that are packed with care and entrusted to the U.S. Postal Service for delivery.

After the long journey to Afghanistan and after much shuffling between hands of people who may not know, and might not care about the origination, destination or contents , the mail finally arrives at a FOB.

Once the mail arrives, a Soldier, who is waiting and looking for his own card or bottle of soap, carefully sorts and logs each piece of mail. He then finally presents the prized package to the intended recipient.

When that happens, everyone is happy.