Heat Can Cause Melamine Chemical Leaching 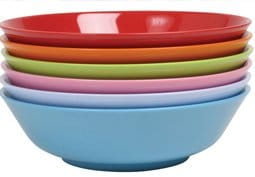 Melamine doesn’t break, which makes it a great option for tableware, but a study shows it can taint food when heated.

Melamine is widely used in fertilizers and to make plastic resins, and under normal circumstances, is generally a stable compound. In the U.S., melamine is approved by the Food and Drug Administration (FDA) for manufacturing cooking utensils, plastic and paper products. According to the FDA, it may also be used in food-product packaging but is not approved as an additive in human food or animal feeds. Consistent low-dose exposure to the chemical has been linked to kidney stones in children and adults. In 2008, a scandal erupted in China when melamine powder was added to infant formula to boost the food’s protein content leading to 50,000 hospitalizations and six deaths.

In the latest study, published in JAMA Internal Medicine, researchers from Taiwan focused on how stable melamine tableware was under high temperatures and studied total melamine excretion in the urine after volunteers consumed hot noodle soup from melamine bowls.

In their small experiment, the researchers asked 12 healthy volunteers to consume 500 ml of hot noodle soup, either in a melamine bowl or in a ceramic bowl. All the participants provided urine samples before their meal and at two-hour intervals after eating the soup, for up to 12 hours. Following a three-week “wash-out” period, the two groups switched, and those who ate from melamine bowls ate soup from ceramic bowls and vice versa. The researchers reported that the total melamine excretion in urine was 8.35 mcg for those using melamine bowls and 1.31 mcg for those eating from ceramic bowls.

Whether the amount released from melamine bowls is enough to cause health problems isn’t clear, but the researchers say the results raise concerns that the compound should be studied more, especially under normal eating conditions in which tableware may be microwaved or hold hot foods.

The authors also warn that levels of melamine released may vary by brand, so not every variety may leach the same amount.

“There have been very few opportunities to learn about this in humans, most of what we know comes from animal studies, but it is a toxic substance and should be approached cautiously from a public-health standpoint,” says Dr. Ken Spaeth, director of the Occupational and Environmental Medicine Center at North Shore University Hospital in Manhasset, N.Y., who is unaffiliated with the study. “It is a very small study, but it raises questions. It suggests that the chemical can migrate from kitchenware to food and into us, and can reach levels higher than we previously thought to be the case.”

After studying the available data, the World Health Organization (WHO) in 1999 said the compound could act as a carcinogen in animals but concluded that data involving human subjects was still incomplete. In 2008, in response to the tainted-infant-formula scare in China, the FDA agreed and reported that the data on melamine and its potential health harms was too inconclusive for the agency to set limits for the compound in food packaging. But the FDA did say that levels below 1.0 parts per million do not raise health concerns. “In terms of what science tells us right now, it’s too early to sound the alarm, but we can use reasonable amount of caution,” says Spaeth. “If someone is worried, they can decrease exposure by not buying melamine kitchenware, not heating up food in it or using it for prolonged storage.” When it comes to protecting your health, it’s not just what you eat, but what you eat your food in matters as well.