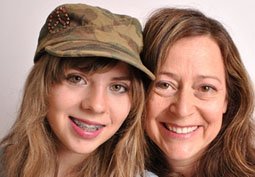 I began writing a Mother’s Day note, and then realized I was writing for a million women like my mom. My message wasn’t just from me, but from 2 million kids who, like me, have sent a parent off to war in the past 10 years.

Over the past decade, members of the military have gone off to fight for their country, leaving behind their families for as long as a year. For many military personnel, the separation can repeat itself about every three years. During these tours of duty, their partners are left alone to be a single parent to their children, to adjust to a new town, and to hope fervently that the spouse who went off to war comes home in one piece.

I remember my mom comforting my 3-year-old brother in the middle of the night as he searched the house for our dad, who was in Iraq. My mom told me how she sat on the couch with me in her arms years earlier, trying not to cry as my dad entered Iraq during the 2003 invasion.

The trials of a military spouse don’t stop with the end of a deployment. On average, military families relocate every two or three years, leaving behind friends and a life. My mom has joined spouse groups and Blue Star Families to make transitions easier. These military parents rely on each other for a tight system of support.

By moving constantly, it’s also hard for my mom to have a job. My mom discovered that there wasn’t much use for a political adviser in a small town in North Carolina. Finding a new job every two or three years is so hard that a study by Blue Star Families found that 52% of non-employed military spouses would like to work.

I know my mom must have covered up her own grief to comfort me and my brother when we’ve hugged our best friends goodbye. Then it is on to the next town or country. A new house has to be found. A new school has to be picked. Everything has to be unpacked, and new connections have to be made.

Then a couple years later, everything is moved again. There’s a common phrase used by military families: Home is where the family is — and it’s true. After a few months the new house feels like home, but it’s the spouse who makes it that way.

Many people think members of the military are the only ones who chose to serve their country. My dad wouldn’t serve unless my mom supported him. When my mom chose to follow the path of military spouse, she was choosing to serve and sacrifice for her country as well.

So happy Mother’s Day to all the military moms. Maybe this holiday can be a chance for more Americans to appreciate what you do.

Sophie Roth-Douquet, 15, is living in Stuttgart, Germany, where her father is stationed with the U.S. Marine Corps.