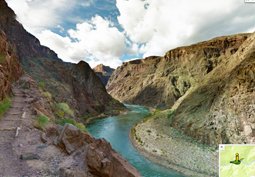 Now you can get a taste of what it’s like to experience the breathtaking wonder of the Grand Canyon, right from your computer chair.

As promised, Google has added more than 9,500 panoramic images of the Grand Canyon to its Maps service, the Web giant announced on Thursday. The interactive images cover more than 75 miles of trails and surrounding roads.

“Take a walk down the narrow trails and exposed paths of the Grand Canyon: hike down the famousBright Angel Trail, gaze out at the mighty Colorado River, and explore scenic overlooks in full 360-degrees,” Google Maps product manager, Ryan Falor, wrote in a blog post.

You can also check out the steep inclines of the South Kaibab Trail, or virtually travel a few hours away to explore the mind-blowing Meteor Crater, which looks like it’s from a different world entirely.

The Google Street View team used Trekker, a 40-pound wearable backpack with a 15-camera system on top, to capture 360-degree views of the stunning national monument. The Trekker, which is controlled by an Android phone, automatically snapped photos as wearers walked the narrow ridges and steep trails of the famed Canyon by foot.

“So no matter where you are, you don’t have to travel far or wait for warmer weather to explore Grand Canyon National Park,” Falor wrote.

The company also recently mapped the slopes of more than 90 global ski resorts, expanded its imagery of the Canadian Arctic, and ventured under the sea with detailed underwater views for armchair scuba divers.

Click here to see some of the amazing views.