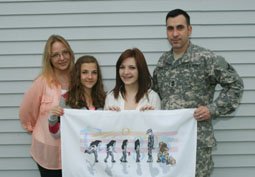 Army.mil: The Official Homepage of the United States Army

FORT MCCOY, Wis. — An artistic entry based on a happy reunion with her deployed father has earned a Sparta High School senior, whose father served at Fort McCoy, first place in the 2013 U.S. Doodle4Google contest.

Sabrina Brady’s doodle, entitled “Coming Home,” was one of more than 130,000 submissions received in the contest and depicted the contest’s theme, “My Best Day Ever.” Sabrina’s doodle told the story of a reunion with her father as he returned from an 18-month deployment to Iraq. Brady’s father is Master Sgt. Bryce Brady, who recently served as the Headquarters and Headquarters Company, Training noncommissioned officer for the 86th Training Division at Fort McCoy.

The doodle was featured on Google’s home page May 23. Brady is the second consecutive Wisconsinite to win the competition. This year’s prizes include a $30,000 college scholarship, a Chromebook computer and a $50,000 technology grant for Sparta High School.

Brady and her mother, April Brady, went to New York with the 49 other state winners for the awards ceremony. While there, the pair appeared on NBC’s Today Show and Fox News, and her story was featured on many Wisconsin state news channel sites, as well as many online news services, such as the L.A. Times, the Washington Post and the Huffington Post. Sabrina and her mother were interviewed by Kathie Lee Gifford and Hoda Kotb of the Today Show.

Her impressions were that the room was much smaller than it appears on television, but “everyone was so nice,” including the behind-the-scenes people.

Sabrina’s father and younger sister, Brittan, remained behind and “were very proud” of their daughter and big sister.

Brady had not entered the Doodle4Google competition before but had entered other more-local art contests, such as the Ladies Auxiliary Patriotic Art Scholarship Contest. When she came across the Google contest and theme while searching for scholarships online, she knew exactly what she wanted to do for her submission.

“I set to work with my pencil, put it into Photoshop and out came (the depiction) you see,” Brady said. “I really wanted to just portray what I, and many other little boys and girls (with a parent serving overseas), have had to go through without explaining a single word.”

Her entry caught the judges’ eyes as more than 1 million votes were cast during the competition. It depicts a sequence of primarily grayscale images of a young girl carrying a small U.S. flag running toward her Army father and then hugging him in a colorful reunion. The letters for “G-O-O-G-L-E” are worked into the background behind the young girls and the Soldier.

“Being an Army child is all I’ve ever known,” Brady said of the thought process that went into the submission. “We’ve had to move a lot, so that really kept us close as a Family, being we only had each other; most kids grow up with their extended Family right down the street. But on the other hand, I’ve gotten to see some really amazing things and go more places than most children. I’m proud of my dad’s service, and I wouldn’t have my experiences any other way.”

Google4Doodle team leader Ryan Germick wrote on the Google4Doodle website blog, “Sabrina’s doodle stood out in the crowd; it tells the story of her reunion with her father as he returned from an 18-month deployment in Iraq. Her creative use of the Google letters to illustrate this heartfelt moment clearly resonated with voters across the country and all of us at Google.”

Brady said she was overwhelmed at the way the events culminated.

The scholarship will help as she is attending a private school, the Minneapolis College of Art and Design, in the fall and will major in animation or illustration.

“Not only does the scholarship help, but I came walking out of Google New York with so much new information and met such great people that I will be influenced by it for a long time,” she said. “I wouldn’t have gotten here without the amazing support from everyone. I wish I could thank every single person, and the fact there are so many is overwhelming. I am so grateful.”

Master Sgt. Brady said he and his wife are very proud of Sabrina and have high hopes for her and her future work.

“I tried not to get my hopes up after she won the Wisconsin contest,” Brady said. “I knew she had a good chance because she had a powerful drawing, it was done well and it was emotionally appealing.”

“My wife and daughter were well taken care of in New York and when April texted me from New York, ‘yes, yes, yes,’ I texted her back asking for more information because that wasn’t enough to tell me what happened. That’s when I found out Sabrina had won. We were shocked and pleasantly surprised.”

Brady, an Active Guard Reserve Soldier, has completed his duty at Fort McCoy, and he and his Family are completing the process to move to his next assignment in Mountain View, Calif.

Sam Russ, the Sparta High School principal, said the staff is proud of Sabrina, who graduated May 24, and happy about her accomplishments.

Many Sparta High School students have excelled and accomplished great things in art, mathematics, science, etc., although in his five years of service none at the national level as Sabrina has accomplished. The school has not received official word about receiving the grant money yet, but the staff has plans to use the funds, he added.

“It will be used to enhance student learning,” Russ said. “It also will help our teachers keep up-to-date with their technology knowledge.”

The staff all wishes Sabrina the best in her future endeavors, as well, he added.