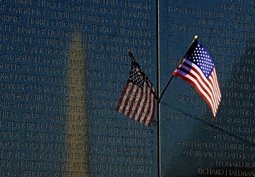 With more than 1,400 hospitals, nursing homes and clinics nationwide, the Department of Veterans Affairs operates the country’s largest health care system. On Veterans Day, here’s a look at how it operates, who it covers and what role it plays in the larger American health care system.

It has more than 1,400 health care facilities that employ nearly 15,000 doctors and 61,000 nurses. It provides care for more than 5 million veterans across the country, and it took in $50 billion in patient revenue in 2010. To put that in perspective, the country’s second-largest health care system in the country, the privately-owned HCA hospital chain, brought in $30 billion.

2. One in 10 veterans lacks health insurance.

The Veterans Health Administration does provide coverage for most veterans, but not everyone. Eligibility is determined in part by income, injuries sustained in combat and the length of service. An Urban Institute study earlier this year found those requirements leave 1.3 million veterans without health care benefits, alongside 0.9 million members of their families. The Affordable Care Act could change it: That same study found that many of those without VA coverage will qualify for Medicaid or health insurance subsidies in 2014.

The department has, for decades now, led the way in implementing digital health care records. It began sharing lab results way back in the 1980s. The system now allows for sharing of data across the VA’s 1,400 health care facilities, which can help cut down on the ordering of unnecessary or repetitive tests. Numerous studies have shown the quality of health care at the VA, as well as productivity, to improve as the facilities have gone digital.

4. The VA “no longer had the capacity to adequately serve all current enrollees.”

That comes from a 2010 Congressional Budget Office report, which notes that the VA stopped enrolling some higher-income veterans in 2003 due to capacity limitations. Enrollment of those veterans began again in 2009, and costs have continued to rise. The Congressional Budget Office estimates that just covering current beneficiaries would cost $602 billion over the next decade.

5. Nearly one third of returning veterans from the wars in Iraq and Afghanistan have a mental health condition.

Nearly 730,000 of the 2.4 million men and women deployed to Iraq and Afghanistan have returned home with a mental health condition, according to the National Council for Behavioral Health. The same group finds that 30 percent of veterans have their mental health needs met with “evidence-based care.” The rest either do not seek out services or receive care that has not shown to improve outcomes.

The VA might be the one federal agency with an Olympic medalist in its midst: Natalie Dell, who won a bronze medal in rowing this summer, researches mental health services for veterans.