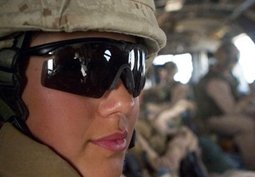 It was 10 a.m., and the Marines trudging along the road bordered by thick Virginia woods had been up for seven hours already.

Their uniforms were soaked with sweat, and their faces showed signs of the pain in their muscles. Their day was far from over.

The demanding training was a typical first day in the Marine Corps’ Infantry Officer Course except for one thing: For the first time, two women were part of the class.

“The women are expected to do everything that the men do,” says Marine Col. Todd Desgrosseilliers, who commands the organization responsible for basic Marine officer and infantry training. “We haven’t changed anything.”

Women have been steadily moving into many ranks previously barred to them, living at forward bases, flying combat aircraft and serving on submarine crews. Women remained barred from the infantry and other combat-arms specialties, but for the first time are being allowed to enter the Marines infantry officer training.

Allowing the women to volunteer for the course is part of an “experiment” to determine how they perform in the rigorous regimen of physical and psychological stress that Marine infantry officer candidates are put through.

The Marine Corps’ Infantry Officer Course is a course in which about 25(PERCENT) of men don’t make the cut or voluntarily drop out.

Critics say the move is taking gender equality too far. They worry that some efforts to accommodate women could lead to changing standards and ultimately hurt military readiness.

“In the end, when all is said and done, what they should be focusing on is combat effectiveness,” said Rep. Duncan Hunter, R.-Calif., a member of the Armed Services Committee. “Does it make us better at literally killing the enemy? That’s what their job is going to be.”

The Marine Corps say its experiment is an attempt collect data for the Pentagon as it considers expanding the number of positions available to women in the military. The infantry is the most elemental and personal form of warfare, and remains off-limits to women, for now.

David Barno, a retired three-star Army general now a senior adviser at the Center for a New American Security, says the infantry is a brutal form of warfare and any lifting of the ban should be considered carefully.

Infantrymen engage in close-in fighting, sometimes “with knives, rocks and shovels,” Barno says. “I don’t rule that out, but I think we should take a hard look at that.”

The Marine Corps has rarely allowed journalists to view the Infantry Officer Course. The candidates, nearly all newly minted second lieutenants who have recently completed the basic officer course, are dropped into the woods well before dawn. They must navigate through darkened woods using maps and compasses.

Carrying packs and rifles, the prospects never stop moving throughout the day. They are given the briefest of instructions and are rebuffed if they ask instructors for further guidance. They don’t even know the requirements for passing the course.

“We’re not just trying to see who is the most enduring or the toughest,” Gen. James Amos, the Marine Corps commandant, told USA TODAY. “They have to be able to make decisions under stress and duress.”

Infantry officers carry an average of about 70 pounds of gear on their body in combat and can march for miles. That weight can nearly double that when Marines are carrying crew-served weapons, such as mortars and heavy machine guns.

Marine Capt. Brian Perkins kept a close watch over a group of exhausted Marine lieutenants struggling through a series of pull-ups.

“She’s just another student to me,” Perkins said, referring to one of the women as she sweated through exercises.

More than 280,000 women have deployed to Iraq and Afghanistan, but not in the infantry.

“Sometimes we forget that even in Iraq and Afghanistan there have been many situations where Marines are fighting with their bare hands against the enemy,” said Maj. Scott Cuomo, director of the Infantry Officer Course. “In a battle in Najaf, I was 50 feet from a Marine infantryman killing the enemy with his knife.”

Defense Secretary Leon Panetta has ordered the services to update him next month on how women performed in the new jobs and on efforts to develop “gender-neutral physical standards” with an aim toward opening still more positions to women.

Developing gender-neutral standards raises the question of whether they would be made less strenuous.

Nancy Duff Campbell, co-president of the National Women’s Law center, says the Marines should re-evaluate the standards before putting women through the course.

Not all women in the military agree. A female Marine officer with two combat tours wrote in the Marine Corps Gazette that the physical demands of infantry fighting were harmful to women.

” ”We as an institution are going to experience a colossal increase in crippling and career-ending medical conditions for females,” Capt. Katie Petronio wrote.

One of the two women that started the 13-week course did not make it past the first day, which tests combat endurance. Neither did 27 of the 109 men.

The Marine Corps did not release the names of the candidates. They did release a statement from the 24-year-old woman who passed: She said she saw the training as an “incredible opportunity” for women.

“It’s about the balance between mental and physical toughness,” Perkins said of those who have what it takes to be infantry officers. “You can see it in their eyes.”