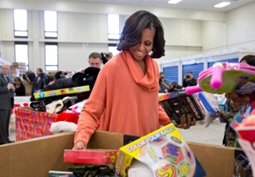 The gesture comes as the Marine Corps ramps up efforts nationwide in support of its Toys for Tots campaign.

As she has for the past four years, Obama joined several Marines inside JBAB’s Naval Marine Corps Reserve Center where they listened to Christmas music, shared some laughs and volunteered to sort toys and clothes into boxes for those less fortunate. The gifts will be handed out to underprivileged children living in the Washington, D.C., area.

“Toys for Tots started with a military family. A Marine reservist and his wife decided to make the holiday a little better for children in need,” Obama told those gathered for the occasion. “Since then, Americans and military families like all of you have spent countless hours bringing gifts and holiday cheer to children all across this country. This is just one example of how military families go that extra mile to serve our communities. I’m proud to be here with all of you today.”

Obama and Jill Biden, wife of Vice President Joe Biden, launched the “Joining Forces” program when they arrived in Washington as a way to honor, recognize and support veterans and military families everywhere. Obama said the program’s goal from the start has been to serve the military as well as they’ve served the nation.

Recently, Obama invited military families to be the first to view the official White House Christmas tree, which is trimmed with ornaments decorated by children living on U.S. military bases around the world. Additionally, guests to the White House are participating in Operation Honor Cards where people send notes of thanks to service members representing all branches of the military.

Pete Osman, president and CEO of the Marine Toys for Tots Foundation and a retired Marine Corps lieutenant general, thanked everyone in the community for their generosity, particularly in a difficult economy and those who are still reeling from the effects of Hurricane Sandy.

He also thanked Obama, who he said has been the campaign’s biggest supporter over the years. According to Osman, she has always kept her word on coming back to volunteer.

“The first lady literally rolls up her sleeves and helps us sort toys. I’m convinced the success of the Toys for Tots program is a result of the help we’ve gotten from her,” Osman said. “When Michelle Obama leads, the American people follow. And they’ve certainly followed her on this one.”

Osman said there are more than 700 local Toys for Tots campaigns nationwide this year. Toys will continue to be collected right up to the holidays and anyone can volunteer to help out, he said.