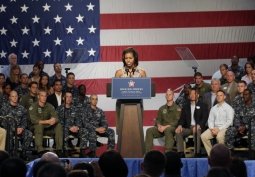 NAVAL STATION MAYPORT, Fla. — First lady Michelle Obama chose a naval station in the electoral battleground of Florida to announce Wednesday that 2,000 businesses around the country have hired or trained more than 125,000 Military Veterans and Spouses in the past year, exceeding a White House goal of 100,000 by the end of next year.

Mrs. Obama also told a crowd of Navy personnel and their spouses at this Jacksonville base that the same companies have committed to hire or train an additional 250,000 Veterans and Military Spouses by 2014. That includes hiring or training 50,000 Military Spouses within three years – and helping them keep those jobs as families move from one duty station to another.

“I thought this challenge was pretty ambitious and when we first started out, we only had two companies as our partners,” She said. “Soon, those two companies became 20, and then 200 and then 2,000 … These 2,000 companies have not just met our challenge, they’ve exceeded it.”

Mrs. Obama said that she is repeatedly hearing from companies that some of their best employees are Military Veterans or their Spouses, so the Joining Forces effort isn’t just the right thing to do, it’s helping companies do better.

“They’re doing this because it’s the smart thing to do for their bottom lines,” Mrs. Obama said. “These companies know that if you can prepare a helicopter engine in Mayport, if you can coordinate thousands of pounds of supplies and deliver them to villages across Afghanistan, then clearly you have what it takes for a manufacturing or a logistics job right here in the U.S.”

Jacksonville has a large military presence and winning support here fits into President Barack Obama’s strategy to win Florida and its 29 electoral college votes – the most of any of the tossup states in November’s election. His campaign is targeting the conservative area to build support where Republicans have usually had strong success. The timing of the trip also precedes next week’s Republican National Convention in Tampa.

The program connects companies with Veterans and helps veterans use their Military skills in the private sector. Mrs. Obama was joined by Vice Adm. Scott Van Buskirk, chief of naval personnel, who praised the project and said it is making a difference for people leaving the military. The administration is also pushing states to allow Military Spouses to transfer professional licenses from state to state to help them get new jobs when their Spouses are transferred to a new base.

In April 2011, the first lady and Jill Biden, wife of the vice president, launched Joining Forces to encourage Americans to support Military families and Veterans. The White House said the hiring push has helped to reduce unemployment among Veterans from 8.6% in July 2011 to 6.9% last month.

“This is just the beginning. We are only scratching the surface,” Mrs. Obama said. “I won’t be satisfied, nor will my husband, until every single veteran and military spouse who wants a job has one. All of you deserve nothing less.”

Mrs. Obama also stopped in South Florida later Wednesday to encourage local volunteers to register just one more neighbor or friend to vote for Obama because those grass-roots efforts clinched the 2008 election, she said.

Obama thanked volunteers for giving their time, acknowledging their lives are busy, but reminding them that knocking on doors and answering phones could make the difference in a key battleground state.

“This election will be even closer than the last one. This election like so many others could come down to those last few thousand votes, especially in states like Florida,” she told an exuberant crowd of about 2,500 packed into a hot Fort Lauderdale auditorium.

She told volunteers to remind undecided voters that her husband cut taxes for small businesses, closed the gap in prescription drug coverage for seniors known as “the doughnut hole.” She said they should also remind voters that he ordered the killing of Osama bin Laden.

Mrs. Obama aimed her appeal to middle-class supporters, recalling her father’s job as a pump operator to remind them that she and the president understand the importance of rewarding hard work and giving everyone an equal opportunity.

“When it comes time to stand up for the middle class…who’s going to have your back?” said Mrs. Obama. She spent nearly 20 minutes talking with volunteers in the crowd after her speech.

Rep. Debbie Wasserman Schultz, a congresswoman from South Florida and chair of the Democratic National Committee, also spoke at the event, warning seniors that Republican presidential nominee Mitt Romney and running mate Paul Ryan’s budget “would end Medicare as we know it.”