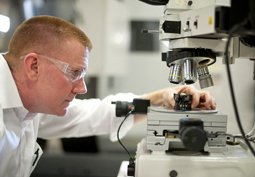 The unemployment rate among younger U.S. Military Veterans, long a source of worry, is declining as companies step up efforts to hire them.

Even so, many Veterans are still struggling to explain the skills they learned in the Military in ways that are relevant for employers, and the unemployment rate for younger Veterans remains well above the national rate for non-Veterans.

General Electric Co. is scheduled to announce Monday the latest corporate initiative to spur hiring of Veterans. Such programs have proliferated in the past two years. A coalition of 76 companies, including J.P. Morgan Chase & Co. and Lockheed Martin Corp.,  last year set a goal of hiring 100,000 Veterans by 2020. Last week, the group said it had hired a total of 28,186 as of Sept. 30, up from 18,249 three months earlier.

Meanwhile, the U.S. Chamber of Commerce over the past 18 months has been organizing Hiring Our Heroes job fairs around the country. So far, the chamber says, it has held about 300 fairs, at which more than 10,000 Veterans and their Spouses have found jobs.

“I see momentum that I haven’t seen for years,” said Mike Haynie, executive director of the Institute for Veterans and Military Families, formed last year at Syracuse University to create training and other programs for Veterans.

The unemployment rate for those who have served since September 2001 stood at 9.7% in September, down from 11.7% a year earlier. That is still well above the rate of 7.4% for non-Veterans last month. The data on younger Veterans, compiled by the Bureau of Labor Statistics and not adjusted for seasonal factors, tend to be volatile from month to month, partly because of a small sample size in the bureau’s surveys, but the rate was down from a year earlier in seven of this year’s first nine months. The data on non-Veterans also aren’t adjusted for seasonal factors.

A flood of new veterans is heading for the generally weak U.S. job market. The White House projected last year that one million people would return to civilian life over the next five years, partly because of the withdrawal of U.S. troops from Afghanistan.

For public-relations purposes, companies like to show they are helping Veterans. But many also find Veterans have skills that are hard to find elsewhere.

Advanced Technology Services Inc., or ATS (advancedtech.com), a company based in Peoria, Ill., that provides machinery-maintenance and other services for manufacturers, says vets make up more than 30% of its workforce of about 3,000. “The Veterans are always clean-cut, prompt, courteous, professional,” said Jeff Owens, president of ATS. “Getting up early, getting to work on time, all those things—that’s not an issue.”Mr. Owens said the skills needed to repair and maintain Military aircraft and ships relate closely to those required in factories.

Some Veterans need to learn business skills, he said, and to be weaned from saluting and saying “yes, sir” and “no, sir.”

GE’s initiative involves cooperation with the National Association of Manufacturers and the Syracuse institute to promote training and efforts to translate veterans’ skills into terms that make sense for employers, a spokeswoman for GE said.

In general, “we have to do a better job preparing them for transition,” said Mr. Haynie, an entrepreneurship professor at Syracuse University. One priority is helping veterans sharpen up their résumés. Mr. Haynie recently saw one that listed the applicant’s core skill as driving tanks—not a type of expertise required at many civilian employers. Mr. Haynie, a retired Air Force major, said the applicant could have played up his experience in hydraulics and radar.

The Society of Manufacturing Engineers, an organization based in Dearborn, Mich., recently began helping the Army tweak training programs at Fort Leonard Wood, Mo., so Army engineers will have a better chance at passing the society’s knowledge-certification exams.

While readapting to civilian life, Veterans are eligible for a special type of unemployment compensation. TheU.S. Labor Department estimated earlier this year that benefit costs $900 million annually. In some cases, Mr. Haynie said, those payments might encourage Veterans to delay their re-entry into the workforce. That would artificially inflate the Veterans jobless data.

Despite the weak job market, manufacturers often complain they can’t find people with certain technical skills. Boston Consulting Group, in a report due for release Monday, found that manufacturers in parts of the U.S. have trouble hiring enough welders, machinists and industrial-machinery mechanics. Such shortages are likely to worsen as baby boomers retire.

That problem resonates for Kennametal Inc., a maker of metal-working tools, alloys and other materials. About 30% of Kennametal’s production work force is eligible to retire within 10 years, said Judy Bacchus, chief human-resources officer at Kennametal, which is based in Latrobe, Pa. Partly because of the need to replace those aging workers, she said, “the Military has become a more important part of our talent strategy.” Ms. Bacchus said Kennametal has found veterans to be good at supervising factory-floor production teams, among other posts.

Mike Sutherlin, chief executive at Joy Global Inc., said the Milwaukee-based maker of mining equipment has a better success rate with Veterans than others. They tend to stay at Joy longer and get promoted more frequently, he said. “They convey a positive, can-do attitude,” Mr. Sutherlin said.