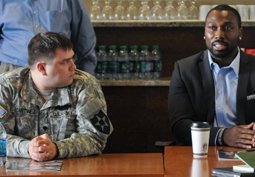 By: Sgt. Justin A. Naylor

Whether injured in combat or knocked unconscious on the field, service members and athletes are both at risk of traumatic brain injury.

That’s why, as part of a national effort between the U.S. Army and the National Football League, or NFL, Soldiers from 7th Infantry Division and former players shared their experiences with traumatic brain injuries, or TBIs, during a round-table discussion Nov. 20, at Virginia Mason Athletic Center, the Seattle Seahawks’ practice facility.

The partnership between the Army and NFL has led to several events, including discussions at the Pentagon and U.S. the Military Academy at West Point, N.Y. Leaders from both organizations hope these discussions will help Soldiers and players recognize the signs of TBI and encourage them to seek treatment.

“It’s awesome that they are partnering up,” Landaas said about the Army and NFL. “It shows they are trying to take control of a pretty serious situation.”

Landaas added the partnership makes him optimistic about the future of TBI victims, and shows that both organizations want to improve treatment and raise awareness of the issue.

In a recent letter that announced the Army’s partnership with the NFL, Army Chief of Staff Gen. Raymond T. Odierno and NFL Commissioner Roger Goodell said: “Our organizations share common traits: pride and passion, dedication and determination, and an enduring belief in the power of team. On a personal level, there is mutual respect, appreciation and admiration between soldiers and players. While the execution of our crafts is fundamentally different, these traits make America’s soldiers and NFL players who they are and the best at what they do. With this initiative, we are seeking to integrate the uncompromising devotion to win with a need to address traumatic brain injuries with the necessary care, consideration, and commitment to prevention that these injuries require.”