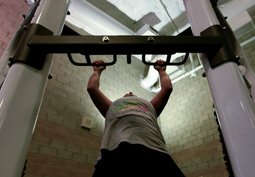 It was intimidating at first.

I looked up into the sky at a distance that seemed far too great for me to reach, considering I stand tall at just under five feet. But I was determined. I could do it.

I mean, the 70-second flexed-arm hang was a breeze, how hard could one pull-up be?

So I jumped up, grabbed the bar firmly and hung with my feet dangling.

I pulled with all my strength. My last aching gasp of air escaped as if it were going to boost my head over that dreadful bar. My eyes closed and I could feel the blood and heat rushing to my head. I kicked my feet in fury and opened my eyes only to realize that I was less than half way there.

Obviously, this wasn’t going to be as easy as I anticipated.

That was six months ago.

Six months ago, I couldn’t do one pull-up, my triceps were non-existent, and my biceps were about as hard as a pillow-top mattress.

That one pull-up I thought would be a walk in the park turned out to be the starting point of a new, improved way of living.

That hot night in June helped me realize that just because I could hold my head over the bar for 70 seconds and get 100 points for my physical fitness test, didn’t mean I was combat-ready.

What if I needed to pull myself over a wall? And I can’t even do a pull-up?

According to Headquarters Marine Corps, pull-ups are a more accurate test of muscular strength. Training for them causes your muscles to grow and adapt for necessary military tasks like pulling yourself over obstacles and carrying heavy equipment.

The All Marine Message 046/12 was released Nov. 27, which announced that female Marines will soon be required to perform eight pull-ups during their annual PFT to score 100 points toward the overall score.

“My strength comes from my core,” said Staff Sgt. Sarah Hickory-Martin, the photo chief for Camp Lejeune Combat Camera. She said she has never had a great deal of upper body strength but still scores high on her annual fitness qualifications. “I am determined to succeed, however, so I have confidence that I will train my body to do them.”

Luckily for Marines like Hickory-Martin who focus more on cardio exercises, the Corps’ has implemented a transition period. Females can, but are not required to perform pull-ups during the PFT for score until January 2014, leaving plenty of time to get in shape.

“Female Marines don’t like being treated differently than the male Marines, so I think we’re lucky we only have to do eight,” said Cpl. Ana Castro, a 3rd Marine Aircraft Wing aviation mechanic who does her best to keep up with her male counterparts by staying physically active.

Castro’s advice to get in shape? “Ladies, start hitting the gym!”

After working hard with burpee pull-ups, pushups and other upper-body exercises, a month into my new workout regimen I was able to perform three proper pull-ups and have since worked my way up to 12. The first step is to evaluate yourself and your physical-fitness level and realize that it’s not impossible.

Like the pull-up bar, way high in the sky for me, it seemed far off at first. But once I put my mind to it and realized it was achievable, looking back, the journey wasn’t as excruciating as I thought.

For more information regarding the female PFT change, refer to the ALMAR.