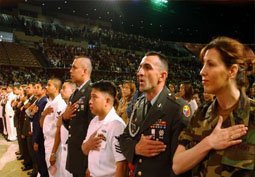 WASHINGTON — The Department of Homeland Security announced on Friday that it will halt the deportations of relatives of U.S. military members, arguing that it puts an unnecessary “stress and anxiety” on troops that are protecting the nation.

Relatives who have extensive criminal records or pose other risks to the country can still be deported. But those with clean criminal records can be placed on a “parole in place” that stops their deportation and allows them to apply for permanent legal status while remaining in the U.S.

“This is a complete surprise,” said Jon Soltz, chairman of VoteVets.org, a veterans group that has advocated for the change for years. “You have a huge percentage of the force that wasn’t born in the United States…and the people they love most can be kicked out of the country. That’s been something a lot of them have worried about.”

In 2010, then-Homeland Security Secretary Janet Napolitano sent a letter to members of Congress concerned about the deportation of servicemembers’ families, explaining that in some cases, they could be granted the “parole in place” designation. But that was something that few immigration lawyers, and even fewer members of the military, had heard about.

“Unless you knew about the letter, you didn’t know about this,” said Margaret Stock, an immigration attorney and former lieutenant colonel in the Military Police Corps. “I’ve dealt with dozens and dozens of these cases. So this is wonderful.”

Under current law, undocumented immigrants living in the U.S. are allowed to apply for legal permanent residence, better known by the green card that such a designation comes with. But U.S. law requires that they first return to their country of origin to apply for the change. If they have been illegally in the U.S. for less than a year, they would have to return to their home country for three years before returning. Undocumented immigrants who stayed in the U.S. over a year had to return home for 10 years before returning.

With the new memo issued by U.S. Citizenship and Immigration Services on Friday, spouses, children and parents of active-duty military members, reservists who may be called up as part of the “Ready Force,” and other veterans can have their deportations halted and can apply for their green cards without leaving the country.

Homeland Security spokesman Peter Boogaard said the cases would still be decided on a case-by-case basis, but said the memorandum formalizes the process to reduce the stress on the nation’s military force.