Family Ties: Deploying Together to Afghanistan 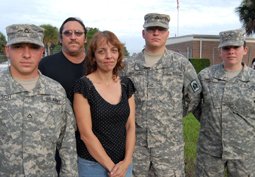 MELBOURNE, Fla. – In a little more than a month, they’ll be serving in Afghanistan, but on July 3 the men and women of the 715th Military Police Company were spending a few last moments with their friends and family before their year-long deployment.

More than 150 members of the Florida Army National Guard unit were honored during a morning ceremony here at their armory, where hundreds of family, dignitaries and military leaders gathered to say goodbye.

The unit was scheduled to leave July 4 for additional training at Camp Shelby, Miss., before traveling to Afghanistan for missions including convoy security and other military police responsibilities.

One Florida family is bearing a greater share of sacrifice during the deployment as three of its members are all deploying together with the 715th: brothers Pfc. Richard and Pfc. Joseph Hirsch, and Joseph’s wife, Pvt. Laura Hirsch, all volunteered for the Afghanistan mission.

On Thursday Joseph and Laura explained how the greatest obstacle to their deployment together would be leaving their two young sons – ages 1 and 4 – during the mission.

“We’re taking it one day a time,” Joseph explained. “We have other family watching over them. Hopefully, it will be alright. We explained to our four-year-old about what we’re doing, and told him that we will definitely be coming back.”

The three Hirschs transferred from the 806th Military Police Company in Fort Pierce, Fla., for the Afghanistan mission, and cited patriotism as one of the principle reasons to serve together.

Laura said their families have really pulled together to take care of the children while she and her husband are gone, but she hasn’t completely come to terms with the emotional aspect of leaving behind two young children.

“I haven’t figured it out yet, but it will be hard,” she said. “Whenever you come to work you just have to put it in the back of your mind and think about them whenever you don’t have anything to do.”

She said they plan to purchase webcams as a way to communicate with their children via the Internet while in Afghanistan, and hope to talk as often as possible over the telephone.

Richard said one of the reasons he volunteered for the deployment was because he isn’t married. “I’m single and don’t have any kids, so if I can take the place of someone who has kids maybe they don’t have to go.”

Richard added that a benefit of the three family members deploying together is they can “help watch over each other” while in Afghanistan.

The Hirsch family also has a sister serving with the Florida National Guard in the 806th Military Police Company, but she is not deploying with her siblings.

The Hirsch’s mother, Patricia, said she was viewing the deployment of her sons and daughter-in-law both with pride and a little bit of anxiety: “I’m very proud that they’re going to be going over, but I’m also scared for them.”

During the departure ceremony, 715th Commander Capt. Jermaine Boone noted that the dedication of the families and Soldiers would keep the unit strong throughout the deployment.

“I have been completely and utterly impressed by the motivation and morale of the family members and the Soldiers,” he said to the crowd of family members, civic leaders, elected officials and Guardsmen. “I’ve seen the hours you’ve put in and I see the work that you do. With this mission I hope it will allow the Soldiers and their loved ones to feel that is has been noble and honorable to be part of the 715th and the Florida National Guard family.”

Since September 2001 more than 8,500 members of the Florida National Guard have served on federal active duty in support of the ongoing Global War on Terrorism.”