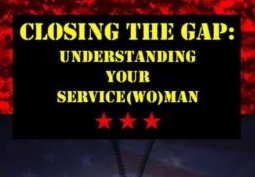 Army wife Yvonne Jones had plenty of good reasons to write a book explaining military life to civilians, but she said what pushed her “over the edge” were the civilians in her own family. Yes, we love our families back home, but they do inhabit a different world.

Sometimes being far away from family is an issue, but Jones said an assignment closer to home provided the greatest incentive for her book, “Closing the Gap: Understanding your Service(wo)man.”

“We were so excited,” she said. “We finally got to live close enough to be able to visit each other whenever we felt like it.” Disappointment set in when her extended family didn’t seem to share that excitement or take full advantage of the precious time they could spend together.

“They didn’t realize that it wouldn’t be long until we’d move away again,” Jones said. “That’s when I felt like I really had to do something to try to get civilian families and friends of military families to understand our way of life a bit better.”

“Closing the Gap” explains the facts and nuances of military life to those who have never lived it. That covers a lot of people, since very few Americans serve in the military.

“There are so many misconceptions out there about military families,” she said. “I believe that we need to create awareness of our existence. And we need some sort of medium that helps diminish common misconceptions that currently exist and that are being reinforced by shows like ‘Army Wives.’ ”

For example, civilians might think deployment is the only way a military career differs from a civilian one. Most books or news stories that feature military life are about deployment. There is much more to our way of life.

In her book, Jones covers deployment, but gives equal time to other facets of military life in civilian-friendly language. She takes on a big subject and expresses it clearly without oversimplifying the way we live or talking down to her civilian audience.

“Closing the Gap” contains a lot of information we’d like our friends and extended family to understand. The book covers relocations, including the factors that determine military assignments (no dartboards involved) and why military spouses might not cry when saying good-bye to their friends (not because we don’t care).

Jones said getting outside her military spouse persona to think of things civilians don’t know about military life was not too difficult.

“What was difficult, however, was to think of some issues that … are never asked about by outsiders, simply because they don’t know about those differences,” she said. “You can’t ask questions about something if you’re not even aware of its existence.”

Redeployment, for example. In addition to not knowing what that word means, civilians — even those close to a servicemember — might think life is easy when deployment is over.

“Those who actually have experienced a deployment know that’s the time where most problems for a military family begin,” she said.

Jones’ book is written for civilians, but she said she hopes it will benefit military members and families.

“Military families need support, no matter how strong we think we are, especially from our own nonmilitary friends and extended families,” she said. “We love them, and we want them to be part of our lives. So it’s only understandable that we also want them to understand our way of life.”

“Closing the Gap: Understanding your Service(wo)man” is available in paperback and e-book form. More information is available on the Spouse Calls blog.