E-mail On Adopting Marine Dogs Is a Hoax 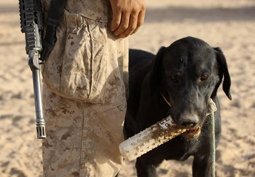 The Marine Corps is debunking an offer to provide bomb-sniffing dogs for adoption that has been published by numerous websites, blogs and e-mail lists.

There are currently no bomb detection dogs available for adoption, the Marine Corps Systems Command said in a statement.

An e-mail whose origin is not clear and that appeared to circulate widely said the Corps was looking for good homes for “incredibly well-trained” Labradors, Belgian Malinois, border collies, German shepherds and Rottweilers that served in war zones.

The e-mail went on to say that the approximately 400 dogs were “war heroes,” having saved countless American lives by sniffing out improvised explosive devices before they could blow up. Adoptive families were told they must go to Washington to pick up the dogs or arrange transport at their own expense.

The contact information provided in the e-mail was that of an actual Marine office and staffer, but when contacted Tuesday the office said the e-mail was a hoax and no such offer was available.

However, by then news stations’ websites in Miami and elsewhere had run with the e-mail as had blogs that cover topics involving pets and adopting animals. Neighborhood listserves in Arlington, Va., home of the Pentagon, also posted the offer to thousands of members.

The Marine Corps Systems Command said it was not known who received the e-mail or who sent it out.

The Marines said such offers are sometimes made for “decommissioned” dogs but that they are offered to other federal agencies first since many are still fit for service even when they can no longer deploy to war zones.