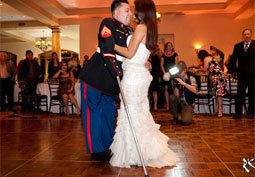 Juan Dominguez lost his both his legs and his right arm after stepping on improvised explosive device while serving as a Marine Corporal in Afghanistan in 2010. But that didn’t stop him from finding true love a few months later, when he met his now-wife Alexis after returning to the States.

“I thought she was cute, so I kind of dumped my girlfriend at the time and asked her out,” Dominguez told TODAY.com. “I flew her to DC to watch me race in the Marine Corps marathon, and she thought I was crazy for flying her out there.”

Dominguez’s big move didn’t scare her off, and the two of them ended up moving together to a small Southern California city called Temecula. “We fell in love with it,” said Dominguez, who is originally from New Mexico. “It was really because of the people.”

Dominguez was embraced as a local hero, and his fellow townspeople celebrated his arrival by raising cash to buy the Dominguezes a house and feting them with a special Juan Dominguez Day.

And they didn’t stop there. When Dominguez proposed to Alexis in February (“I asked her mom for permission,” Dominguez said. “I went old-fashioned,”) local winery owner Bill Wilson offered to throw them a wedding.

“[Wilson] asked if we had any plans for the wedding,” Dominguez said. “It turned into him saying they were going to donate the venue, food and wine, all on them.”

Dominguez also reached out to Jennifer Molloy, who runs local event planning firm Amore Events. Molloy offered to donate her services to the couple, and used her connections in the industry to help drum up a dream wedding with all the fixings.

“I just felt like I had been chosen by [Juan and Alexis], and couldn’t have been happier.” Molloy told TODAY.com. Her connections were only too happy to help the Dominguezes, and it was only a matter of weeks before the couple’s wedding was completely pulled together.

“Sometimes i couldn’t even finish a sentence when I would talk to one of my fellow event associates and they would be jumping at the chance to donate services, anything,” Molloy said. “It was incredible.”

Roughly $30,000 to $35,000 in total services were donated to the happy couple, including the food, venue, cake, photos and a video of the event, though there were a few things Dominguez wanted to give Alexis himself.

“They wanted to buy her ring and her dress, but I wanted to take care of that,” he said.

The wedding was held on April 28th, with 147 of the Dominguezes’ closest friends and family in attendance. Dominguez, who uses prosthetics and wore his military uniform, was able to walk and dance all night.

Post-wedding, the couple went on a six-day honeymoon to Bora Bora. “it was magical, such a beautiful place,” Dominguez said. “More breathtaking than pictures describe, and gave us a good chance to decompress after the wedding.”

Now, they’re planning for a future together in Temecula. Alexis, an aspiring graphic designer, wants to return to school next year to study illustration and crafts.

“Alexis designed everything in our wedding, the save the date, invitations, place cards, you name it,” Dominguez said. “She’s an artist.”

As for Dominguez, he’s also planning to return to school in hopes of pursuing a music career. “I have an aspiring dream to be a musician,” Dominguez, who is a drummer, said. “We’ve talked about having kids, but we want to put our educations first.”