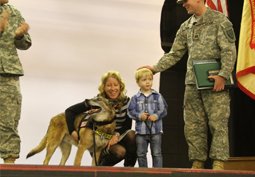 It is a retirement ceremony like many. The anthem plays over the loudspeaker. Soldiers render honors. A barking of orders, medals pinned and an old Soldier — unleashed from military service — begins a new chapter in life.

However, the retirement ceremony held, Feb. 1, here on Conn Barracks, was different than most. Soldiers and community members from Schweinfurt, Bamberg and Mannheim gathered to honor Lando F620, a military working dog who rose to the rank of sergeant first class and retired from the 94th Military Police Detachment.

“The average lifespan of Lando’s breed is 15 years,” said Capt. Dane M. Hiltner, commander of the 630th Military Police Company, during remarks delivered at the ceremony. Lando, a 12-year-old Belgian Malinois, has been in military service for the past eight years. “Can you imagine? As humans our average lifespan is maybe 80. So, can you imagine serving the Army for 40 years?”

Lando deployed four times in those eight years. At the ceremony he was awarded the Army Achievement Medal for his service to the Army.

“He is the dog father. All the other dogs love him. They won’t bark at him,” said Staff Sgt. Richard McNulty of the 94th MPD, who has worked with dogs like Lando for four years.

Lando entered the military working dog program in December of 2003 at Lackland Air Force Base, Texas, where all military working dogs receive their initial training. He trained as a patrol explosive detection dog in 2005 and was then assigned to the 272nd Military Police Company in Schweinfurt, Germany. He continued his career with the 630th Military Company and finished under the 94th Military Police Detachment.

Lando deployed four times — once in support of Operation Enduring Freedom, twice for Operation Iraqi Freedom and most recently in support of the Kosovo Force. He had 15 confirmed finds while deployed downrange.

“The biggest achievement that he has done is finding explosives downrange,” said McNulty. “There is no way to calculate how he saved lives — finding the explosives, finding the (improvised explosive devices), getting them off the route the Soldiers were going.”

Lando also provided force protection to the president and vice president of the United States and the secretary of state, said McNulty. But when he wasn’t sniffing out bombs and protecting heads of state, Lando was protecting the Bamberg and Schweinfurt military communities working perimeter checks and gate guard.

Military working dogs spend countless hours with their handlers to hone the skills necessary to sniff out drugs or explosives. But now, Lando’s golden years are in front of him as he transitions into retirement.

“He gets all excited,” said Staff Sgt. Michael S. Bacon, about Lando’s work ethic even today. Bacon is the kennel master for the 94th MPD. “He wants to do it even though his body can’t really do it for him anymore. Mentally he is like ‘let’s go, let’s do this.'”

One Bamberg family has now decided to adopt him.

At the Feb. 1 ceremony, Capt. Rory Thibault, his wife Johanna and their family received Lando’s leash and a certificate of adoption, formally certifying Lando’s transition out of military service and into doggy retirement.

“When we saw a note on the Bamberg community page about a (military working dog) looking to retire we were intrigued,” said Johanna Thibault. “An older and well-trained dog would be a great fit for us. After we met Lando we fell in love and realized he’d be a great fit for our family.”

Pet owners can adopt military working dogs once the dogs are removed from service for reasons ranging from medical issues to their own disinterest in sniffing out explosives.

“They want to work,” said McNulty about all military working dogs. “They have a drive to work. It takes them a little longer to go to a home and be a pet. Their job is to just be loyal to that family, not search for explosives, not to do bite work anymore. It takes them time to adjust to their new life.”

Lando does not have any medical issues. But his new family should be warned.

“He sleeps on his back with his legs up in the air,” said Staff Sgt. James A. Hall, the kennel noncommissioned officer in charge, who is familiar with Lando’s antics. “It looks like he is playing dead.”

Although the Bamberg and Schweinfurt communities will no longer be graced with the ‘Dog Father,’ his new family already has plans on how Lando will spend the rest of his dog days.

“It’s very clear to us that Lando was well loved in the Schweinfurt and Bamberg kennels. He is a people-oriented dog, and we’re making sure to include him in everything we do. Be it sitting and watching TV or walking to kindergarten, we’re making sure Lando is there with us,” said the Thibault family.