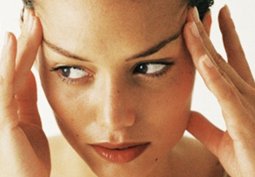 “A twitching eyelid is a sure sign that you’ve got too much on your plate.”

Stress could be causing your eyelid to make you look like an overenthusiastic flirt–but so could fatigue or even dry eyes, which affects half of women over 40, says Anne Sumers, MD, a clinical correspondent for the American Academy of Ophthalmology. Sumers says that while ophthalmologists like her see at least three patients every week with eyelid spasms, there’s no clear consensus on what causes them. However, experts are sure that these twitches aren’t a sign of a serious problem. Sumers says that it may help to get more rest, to try lubricating eye drops or to take a vacation from work–but even if you do nothing, she says the spasms should go away on their own in four to six weeks (at the most).

“Taking deep, slow breaths can help you calm down when you’re feeling panicked and overwhelmed.”

It makes sense that when you’re short of breath, you should try to compensate with a little extra oxygen, right? The problem is that when you are experiencing an intensely trying situation–waiting to hear the results of a serious medical test, during severe turbulence on an airplane, or when you slice your thumb with a bread knife just as your brunch guests pull into the driveway–you’re probably already taking in too much oxygen and could be at risk of hyperventilating, says Alicia Esperanza Meuret, PhD, associate professor of psychology at Southern Methodist University in Dallas. In her research on patients who suffer from panic disorders and asthma, Meuret has found that a more effective way to calm down is to take shallow, regular and slow breaths through the nose (not the mouth, which makes it too easy to suck more air than you actually need). “Imagine a beach where the water is sliding in and out in time with your breath,” she says. This may feel slightly uncomfortable at first, as you battle the impulse to fill your lungs, but Meuret says you should start to feel more relaxed after practicing a few times.

“You can develop an ulcer from worrying too much.”

Since the 1980s, we’ve known that the most common cause of a peptic ulcer is actually an infection of H. pylori bacteria. So why do so many of us still associate ulcers with stress? Here’s the deal: Excessive use of OTC painkillers such as aspirin, ibuprofen and naproxen–the stress-busters we rely on when we’re suffering from tension headaches, tight shoulders or a put-upon, aching back–can also cause ulcers or make them worse, explains Patricia Raymond, MD, a fellow of the American College of Gastroenterology. These NSAIDs can break down the mucous membranes that line the stomach, allowing gastrointestinal acid to splash up and cause burning pain. Raymond adds that alcohol–another popular de-stressing remedy–can exacerbate an existing problem.

“Frazzled nerves make us see the worst in every situation.”

Stress often brings out our inner optimist, concluded researchers from the University of Southern California–but that’s not always helpful. In an article published in the February 2012 journal Current Directions in Psychological Science, psychologists reviewed studies in which people were put in tense situations (for, example, being told to hold their hand in ice water or to give a speech), and found that when these stressed-out participants had to make a decision, they focused more on positive outcomes. So if an overworked, strung-out person were trying to decide whether to move to a new city for a boyfriend she might focus on the “pro” of romantic happiness over the “con” of leaving a job she liked. Whenever possible, wait to tackle big decisions until you’re feeling your most relaxed–like after a bath or on a lazy Saturday afternoon.

“Stress doesn’t really have any effect on your hair.”

The good news is that excessive physical or emotional stress hasn’t been proven to make hair turn gray –or curly or frizzy, for that matter. The unfortunate news is that it could cause hair to fall out. Major stressors such as illness, injury, surgery or the loss of a loved one can affect your hair’s growth in two different ways: The hair might stop growing and lay dormant, then fall out several months after the life-upending event (it will grow back in half a year or so). Or, it could stimulate the white blood cells to attack the hair follicles, causing the hair to fall out in patches (this may require special treatment by a doctor). In both cases, the hair loss isn’t usually permanent.